Edinburgh firefighters are helping shape the futures of young pupils by training them as potential life-savers.

As part of an ongoing commitment to help protect and inspire communities, the Community Action Team has teamed up with a range of partners to launch  an initiative designed to enhance lives and improve employment prospects. 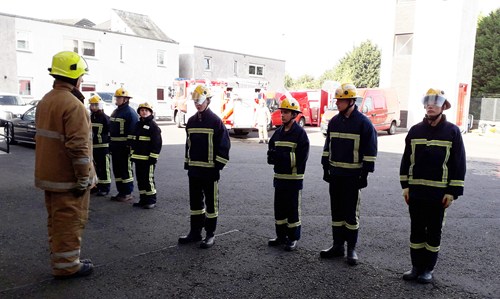 The initiative has seen students from the capital’s Trinity Academy join firefighters at Crewe Toll Community Fire Station to learn what it takes to become a member of the Scottish Fire and Rescue Service ranks.

Teenagers were put through their paces and tasked with working as a closely knit team to don breathing apparatus equipment and rescue “casualties” - while making their way through “smoke-filled rooms”.

The programme has been in part organised and launched by SFRS Watch Manager Vikas Chopra, who has been working closely with partners to design challenges and activities.

He revealed: “We’re hoping we can make a positive impact on the students and promote confidence and resilience.

“This is amongst the most important work we do as community firefighters – it’s building positive futures, ultimately.

“Everything  the students experience during the course is what the operational crews get, it is not a watered down version- I think the students were a bit surprised to learn that.

“These students are getting ready to enter the final stages of education before heading out into the world of work. They’re becoming young adults and if we can help boost confidence or enhance their employability skills then we’ll be delighted.”

WM Chopra has already been impressed by the progress displayed by students in just two short weeks.

He said: “The students have been very engaged and are a credit to themselves, their school, parents as well as to the wider community. The difference between the people we met on day one and who we are working with now is amazing.

“Week one involved SFRS and partners visiting the school and delivering a variety of inputs.

"Week two has seen the students come into the fire station and be put through their paces.

“The programme will end with a display of everything which has been learned and will take place in front of friends, families and local councillors.”

As well as working with firefighters, students have benefited from workshops led by groups including Police Scotland, the British Red Cross and Edinburgh City Council.

Information has been shared to build knowledge and awareness around mental and sexual health as well as online and digital safety.

Students who complete the course will be presented with an SFRS Employability Award, which can help go towards gaining further educational qualifications.