Fire-related injuries have decreased by 35 per cent across North Ayrshire, according to latest figures. 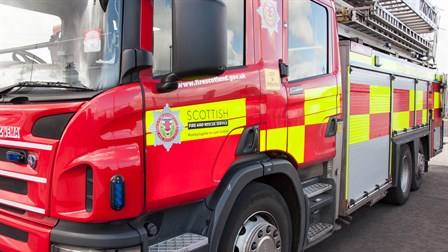 Fire-related injuries have decreased by 35 per cent across North Ayrshire, according to latest figures.

There were 11 casualties reported between April 2017 and March 2018 – down from a total of 17 over the same period the year before.

A total of 145 accidental dwelling fires were also reported to the Scottish Fire and Rescue Service last year, down seven per cent from 2016.

This drop comes as firefighters across North Ayrshire carried out 1,846 Home Fire Safety Visits (HFSV) in the area – a cornerstone of the Service’s prevention efforts to support people to stay safe at home, particularly the elderly and vulnerable.

Firefighters will provide advice on what to do in the event of an emergency and also check or install smoke detectors for free.

He said: “There is a clear link between fire-related casualties and accidental dwelling fires.

“That is why we make such a concerted effort in the provision of Home Fire Safety Visits to ensure everyone has adequate fire detection in place.

“Our crews have carried out more than 1,800 Home Fire Safety Visits during this reporting period, and fitted 1,237 free smoke alarms.

“We want everyone to be safe in their homes and cannot stress enough the importance of having a working smoke alarm.

“If fire breaks out, a smoke or heat alarm will give you valuable early warning to react and reach a place of safety. And, if you are sleeping, a working alarm could be absolutely vital.”

The latest figures were revealed in a SFRS report presented to North Ayrshire Council’s Police and Fire Committee on Tuesday, May 15.

A total of 594 deliberate fires in North Ayrshire were reported to the Scottish Fire and Rescue Service between April 2017 and March this year – down from 640 on the same period the year before.

He said: “Deliberate fires put unnecessary pressure on firefighters when genuine emergencies arose and could have placed lives at risk.

“These incidents are completely unacceptable. Every deliberate fire has victims, costs – and consequences.

“We take a zero tolerance approach to these incidents and work closely with our partners at Police Scotland in an effort to trace anyone involved in this unacceptable and criminal behaviour.

“Our firefighters work extremely hard to engage with the public and promote safety messages in order to keep our communities as safe as possible.

“In addition, we ask local residents and businesses to ensure that rubbish does not accumulate outside their property and that wheelie bins are stored in a safe and secure area until collection.”

LSO Scott also highlighted The Scottish Fire and Rescue Service’s public consultation as it proposes to train and equip firefighters to meet new and emerging modern risks such as terror attack and severe weather related flooding – which closed on May 14.

He said:  “We held a 90-day public consultation which closed earlier this week, called ‘Your Service … Your Voice’.

“We asked the public, our partners and stakeholders for their views on our proposals to transform the way the SFRS delivers a service that better meets the new and emerging risks now facing Scotland’s communities.

“There is absolutely no doubt that by seeking to transform, the Scottish Fire and Rescue Service is leading the way in Scotland’s public sector.”