An East Ayrshire firefighter has revealed how he achieved his life-long dream of working to protect his hometown. 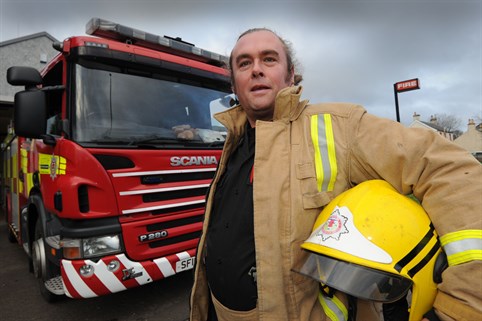 Living in the small village of Muirkirk, George Kelly always harboured aspirations of becoming a firefighter.

A burning desire to help protect his family, friends and neighbours drove George to turn his dream into reality in 2006  – when he became a retained firefighter.

Twelve years on, George, 45, has helped protect his community on countless occasions and has learned an array of skills he never thought possible.

His efforts have seen him progress to the rank of Watch Manager and, such is his passion for the role, George is now appealing to others to follow in his foot-steps.

George explained: “I’ve stayed here all my life and joining the fire service is always something I wanted to do.

“It’s a big community thing for me - I saw it as a way of giving something back to my town.

“Muirkirk is a small place where everyone knows everyone - and we are part of that small, but tight community.

“During my time with the Service I’ve become a qualified first aider and have learned how to drive a fire engine while responding to emergency calls.

“But on top of that I’ve also learned vital skills covering teamwork and working with members of the public.

“The best thing I ever did was join the fire service.”

The village’s seven strong crew is currently on the look-out for new recruits.

“Having a fire service is really important to the people who live here, they feel safe knowing we are here.

“I would one hundred percent recommend getting involved in this kind of work.

“You can learn new skills, meet friends for life and help protect your community.

“It’s just a great feeling to be part of an amazing team and continually be giving back to the community I have spent my life in.”

George and his crew train at Muirkirk Fire Station every Wednesday between 6.30pm and 9.30pm.

Anyone who wishes to find out more can visit the station between those times.

For more details on the RDS recruitment process, visit the SFRS website or www.myjobscotland.gov.uk where potential applicants can download an information pack.