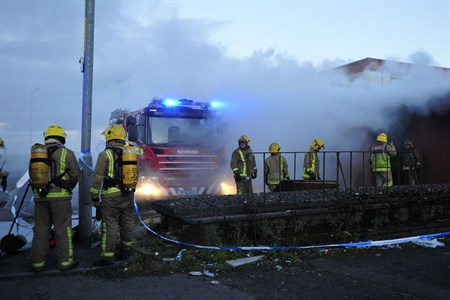 Firefighters have been working through the night to battle a major building fire in the Barmulloch area of Glasgow.

Five appliances from Bishopbriggs, Cowcaddens and Springburn were immediately mobilised following reports of a fire at the former Broomfield Tavern pub at 8.08pm last night (5 July).

On arrival crews found the two-storey property well-ablaze with smoke visible across the North Glasgow area.

The building consisted of a former derelict pub and a small betting shop on the bottom floor, which was closed at the time of the incident.

Due to the extensive nature of the blaze the fire was split into three separate sectors with firefighters in breathing apparatus deployed to each area to search for casualties and begin initial firefighting operations.

A total of eight firefighters in BA kit entered the building and used three main jets and one hose-reel jet to fight the flames in difficult conditions.

Sectors one and two were quickly cleared and dampening down operations commenced afterwards to halt any fire spread.

Firefighting continued to work in sector three until around 6am when the fire was finally extinguished.

A systematic search of the building and clearing of debris took place at first light and no casualties were found.

Stephen Nesbit is a Watch Manager with the Scottish Fire and Rescue Service (SFRS) and was the officer in command of the incident.

He said: “This was a significant and challenging fire and our crews have worked tirelessly in very difficult conditions.

“A total of nine pumps were on the incident ground at one point as we tackled the incident on a number of different fronts.”

The derelict property has sustained significant damage on both floors with large amounts of debris. The betting shop has also suffered from smoke damage.

A fire investigation team will attend the incident and conduct initial enquiries once it is safe to do so.