A disastrous and destructive fire took place at numerous properties at the above location. Fireman John Harrison of the Glasgow Fire Brigade died as a result of injuries received whilst firefighting. 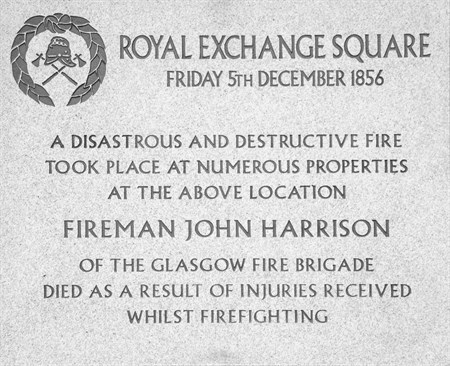 In 1856, the city of Glasgow was expanding with various trades and the steady influx of people from the Highlands and Ireland.

At that time, it was quite an involved procedure for firefighters to attend a fire.

To sound the alarm, a team of drummers had specific routes to travel to which included the houses of where the firefighters lived. The houses had a sign indicating a fireman lived there.

Fire pumps were then taken from various sites and hand pushed to the fire.

Volunteers from the public were collected to assist pumping the levers, receiving a brass token to redeem the following day.

Standard refreshment for all walks of life at that time was beer or small beer (watered beer) issued at fires to slake the thirst. The chant would invariably be heard "more beer, more beer!", as the fire progressed and their pumping efforts were further required!