Whilst engaged in fighting a serious fire in a warehouse, a firefighter of the Glasgow Fire Service became trapped. Six of his colleagues entered the property to rescue him. 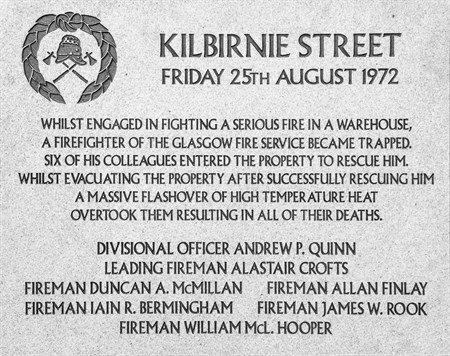 Whilst evacuating the property after successfully rescuing the trapped firefighter, a massive flashover of extreme heat overtook them resulting in the deaths of all seven firefighters.

The people of Glasgow were shocked by this, the second major fire service tragedy in 12 years. As had happened following the Cheapside Street Disaster in 1960, a huge crowd lined the streets as hearses bore the bodies of the Kilbirnie Street victims to Glasgow Cathedral for the funeral service. The bodies of six of the seven firemen were then taken to the Necropolis where they were interred in the vault under the Cheapside Street memorial.