Firefighters who were pelted with stones and bricks at a Bonfire Night incident last year have urged people to go to organised displays.

Cumbernauld Community Fire Station’s Blue Watch was mobilised by Operations Control at 4.49pm on Friday, 5 November, 2021 to reports of a bonfire in the open in a grassy area near the North Lanarkshire town's Torbrex Road.

What happened next took Crew Commander Glen Reid and his colleagues by surprise. He said: "Once we arrived we had to extinguish the fire because of a gas leak in the area. I explained this to the bystanders and as soon as we started to put water on the fire we were pelted with bricks and stones.

"We had to retreat back to the fire appliance where the vehicle then came under attack. We realised that we couldn't get out the street because it had been blocked off with wheelie bins. Police attended the scene and the youths ran away."

Three firefighters sustained minor injuries during the incident. Two attended hospital and were discharged the same evening. There was also surface damage to the appliance.

CC Reid, who has worked for the Service for more than two decades, added: "We couldn't actually believe it to be honest with you. Someone could've been seriously hurt and this kind of behaviour puts an added strain on emergency services. As we get closer to Bonfire Night this year we'd urge people to always go to an organised event." 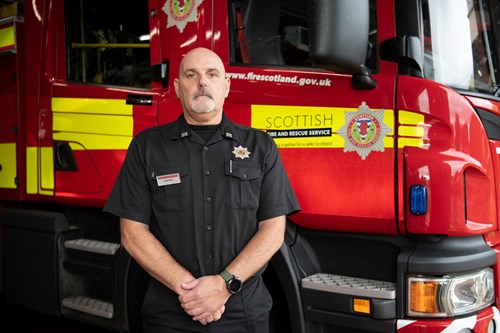 Bonfire Night is one of the busiest nights of the year for the Scottish Fire and Rescue Service.

In 2021, there were eight reported attacks on crews along with the three injuries.

Figures also indicate that firefighters responded to more than 370 bonfires across the country during an eight-hour period on 5 November.
In the weeks leading up to Bonfire Night, between 8 October and 5 November, crews around Scotland also attended more than 880 deliberate secondary fires, including bin fires and grass fires.

Deputy Assistant Chief Officer Alasdair Perry is the Scottish Fire and Rescue Service’s head of prevention and protection. He said: "Attacks on our firefighters are completely unacceptable and are carried out by a small minority."

We know that our crews have a lot of support within our communities. We want people to enjoy themselves at times of celebration but we want them to do so safely and think of others, including our crews who are working hard to respond to emergencies.

"Bonfires and fireworks go hand in hand at this time of year, and we advise people to go to an organised event wherever possible and always follow the Fireworks Code."
See a list of organised events taking place across Scotland in our fireworks and bonfire safety section of our website.