Stephen McGill was only nine years old when his firefighter dad died in the line of duty. 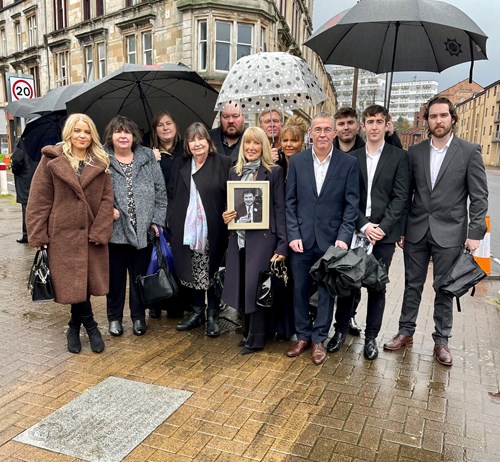 His father, Adrian McGill, was tackling a fire on Glasgow’s Maryhill Road. On 18th November 1972, crews were called out to a fire in a disused wallpaper shop. As the firefighters worked to save the flats above the shop, the fire spread through to a row of tenements on Great Western Road.

Firefighters rescued 15 people by ladders and over 200 people were led through smoke to safety or evacuated from adjacent premises.

Sub Officer McGill gave his breathing apparatus to a resident who was trapped in her top flat on Maryhill Road. Firefighters rescued the resident, who was called Alice Mulgrew, by ladder but sadly she passed away soon after and Sub Officer McGill succumbed to the effects of smoke inhalation.

Adrian, who was 34, left behind a wife, Eileen, and their three children, Stephen, Shirley and Alan. They were aged, nine, eight and nine months. 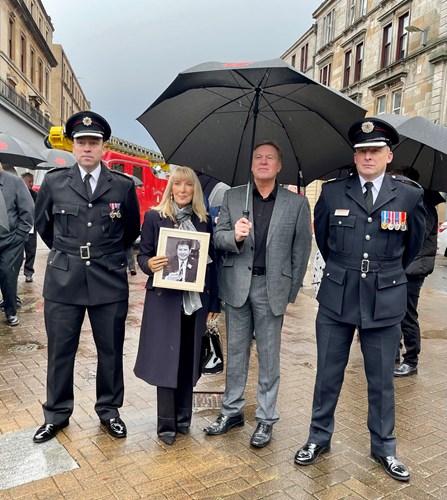 Stephen said: “I remember it was a Saturday. He went to work and never came back. We heard on the teatime BBC news that there had been a big fire in Glasgow and a firefighter had died but we weren’t unduly concerned because he went to a lot of big fires. But at around 7pm two senior firefighters came to our door in full dress code – and as soon as we opened the door we knew what news they were bringing.”

The McGill family, like most firefighters’ families at that time, lived in flats above fire stations. Stephen remembers the families living next to their home in Govan, filing up the stairs and coming to visit. He also remembers his father’s funeral where firefighters lined the streets to pay their respects standing with their axes and helmets.

On the 50th Anniversary of Adrian’s death, the Scottish Fire and Rescue Service (SFRS) held a memorial service in Adrian’s honour presided over by the SFRS chaplains at a heritage plaque on the Maryhill Road site. SFRS Area Commander David Murdoch, Local Senior Officer for Glasgow, paid tribute to his bravery and Stephen also said a few words in his father’s honour. Members of the McGill family stood together, including Adrian’s sisters Patricia Campbell and Marion Quatrine.

Stephen, who is 59 and lives in Erskine, said: “It was a long time ago but it’s still fresh in my mind. My mum was only in her early 30s and with a young family.” 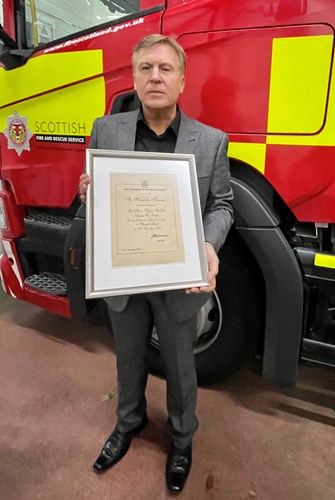 When Adrian died in 1972, Glasgow City Council commemorated him with a bravery certificate. Stephen gifted a copy of the certificate to the Scottish Fire and Rescue Service in recognition of the support his family have received throughout the years, both financial and emotional.

He said: “What happened was sad but we were lucky, we were never alone. We had financial and emotional support from the fire service, right through our teenage years.

“If my mum was here she would be thrilled he’s getting this day in his memory. My dad was a very gregarious and fun man. He loved life and he loved being a firefighter. This is a celebration of his life and what he did.”

Stephen also followed his dad’s career and served as a firefighter for around seven years with Glasgow Fire Brigade, based at the city’s Cowcaddens Fire Station. He was also seconded to the then North West Fire Station - now Maryhill Fire Station - it’s where his dad was stationed.

He said: “It was quite surreal to be walking around the rooms and the dorms where he had spent his last days and where he would have been stationed that day when the engine left.”

Area Commander David Murdoch is SFRS Local Senior Officer for Glasgow. He said: “It is an honour to be here today and to stand with the McGill family and friends as we remember firefighter Adrian McGill. This is a fitting tribute to a brave man who made the ultimate sacrifice to help save lives and protect communities. He will never be forgotten. His spirit lives on in each and every one of our firefighters today as they approach their role with that same commitment and selfless dedication.” 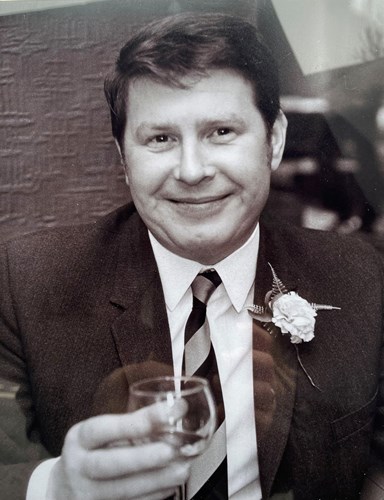 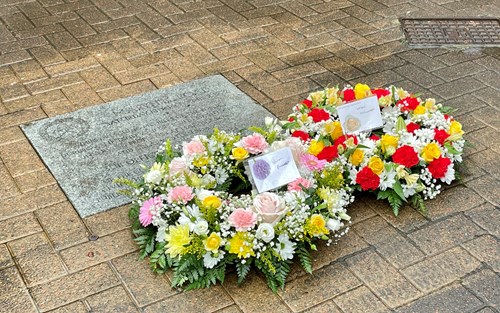