A firefighter from Aberdeen who lost his life in the line of duty more than 100 years ago has had a plaque unveiled in his honour. 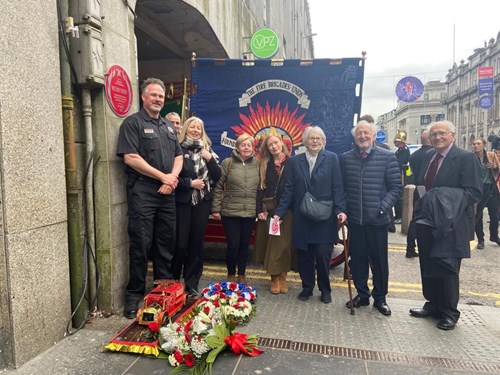 William Fraser, who was 28, died on March 2, 1909 while battling a warehouse fire at Aberdeen’s Adelphi Court. He was struck by a guttering pipe that knocked him off a ladder while fighting the blaze at a bookbinder’s premises. He was a father to a baby girl who was less than a year old.

On Sunday, April 24, 2022 a ceremony was held to remember him. Members of Mr Fraser’s family travelled in a procession from the city’s Trinity Cemetery, where William is buried, to Adelphi Court where the Red Plaque was unveiled in honour of his sacrifice.

Ross, who is based at Aberdeen Central Fire Station, contacted the Aberdeen and NE Scottish Family History Society, researched the Press & Journal archives, located William’s grave at Trinity Cemetery in Aberdeen and also reached out to the Facebook community.

His search eventually led him to William’s relatives in Aberdeen who included grandson, William Niven. The 80-year-old reckons the fallen firefighter has around 30 descendants.

William, who attended the ceremony said: “The service at the cemetery was very touching and the family appreciated the Minister saying a few words. It was very moving – it was more moving than I thought I would feel. The amount of work that went into the organisation of the day must have been tremendous. Now there is something people will see, take notice of and understand that someone was killed doing their job there.”

The baby daughter William Fraser left behind was Williamina, also known as Winnie. She never got to know her father and the details of the firefighter which were passed down through the generations were limited. There is now a miniature replica Red Plaque placed upon William Fraser’s grave which has helped piece together a missing part of the family’s history.

William explained: “When we were growing up my mother never knew her father because she was only about nine months old when he died and it was something that wasn’t really spoken about. We didn’t know where his grave was and it was very good of Ross to go to the extent of finding it. I can’t praise Ross enough for everything he has done.” 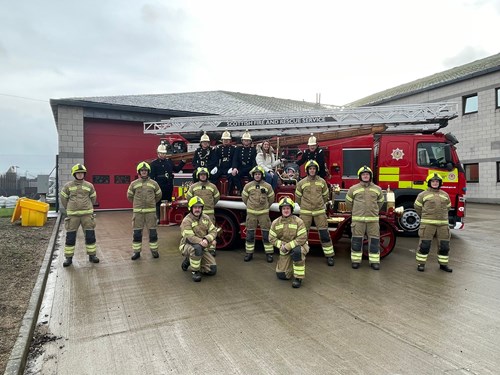 Amy got in touch with the station when she saw a Facebook post looking for William’s relatives. She made the connection to her grandmother Roberta, a daughter of Winnie.

Amy and her 11-month-old daughter Amelia visited Aberdeen Central Fire Station and met with Ross and the Red Watch crew. The North East Fire Heritage Society, were also there with a vintage fire engine and they were dressed in what would have been the uniform William would have worn.

Amy said: “We are really proud, and to have something there to remember him 100 years later is so special. He died so young and Winnie wasn’t even a year old when he died. It is a shame my grandma Roberta isn’t here to see this. She would be so proud. William Fraser was her grandfather and this would have meant something very special to her.”

Ross said: “I’m delighted we managed to find William’s relatives. As an Aberdeen firefighter today. I wanted to make sure that William was remembered appropriately. I felt we owed him that."

"Red Plaques remind us of the extraordinary sacrifices that firefighters make, and we are glad to be able to honour the only firefighter to die in the line of duty in Aberdeen with one.

He said: “Being a firefighter is a noble service and profession, William’s family and descendants should be proud. William and his colleagues of the day were the foundation of the modern Fire Service as we now know it. His bravery and that of others who have served through the years has protected lives and property. We remain highly committed to protecting our communities and that passion has never wavered.

“I am immensely proud of the firefighters of Aberdeen City and of the Red Watch from Central Fire Station for their endeavours to create this event. It was firefighter Ross Urquhart who started this journey and allowed us to walk in the shoes of firefighter William Fraser for a moment.

“The Fire Service is a family and we are grateful we have been able to pay our respects as we remembered one of our own.” 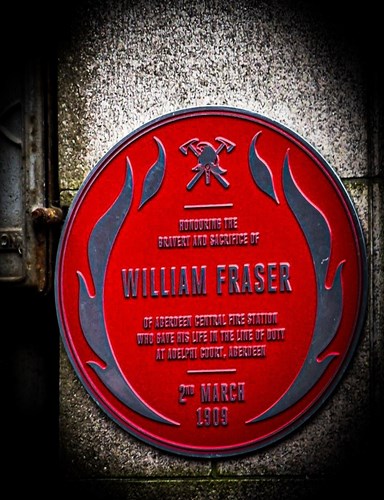