Gordonstoun’s volunteer Fire Service has been awarded The Queen’s Award for Voluntary Service - the highest award a local voluntary group can receive in the UK and is equivalent to an MBE. 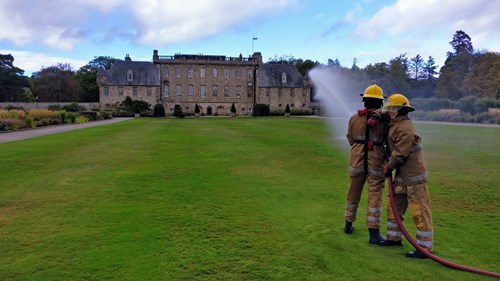 Gordonstoun is the only school in the UK to have its own Fire Service, which consists of students and staff who crew the school’s own fire engine. They respond to emergencies as part of the Scottish Fire and Rescue Service. The school-based service was established by students in 1942 to help put out fires during the Second World War, and has continued ever since. This year marks the unit’s 80th anniversary.

At the school’s graduation ceremony on May 28, volunteer firefighter Fadheela Redpath received the annual James Lythgoe Memorial Award in recognition of the firefighter who has made the greatest contribution to the Gordonstoun Unit.

James Lythgoe joined the Gordonstoun Fire Service in 1997. He became a Leading Firefighter and a Sub Officer in 2000. Sadly, James passed away in December 2002 after a period of illness. 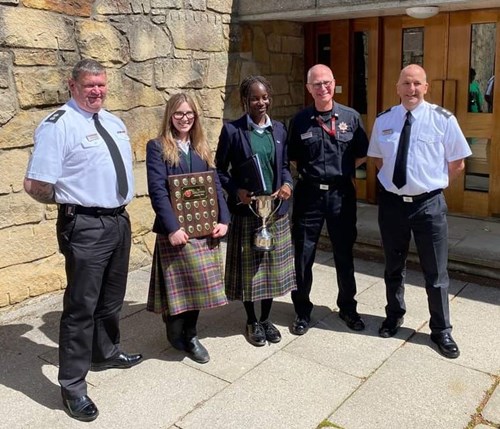 Student volunteer firefighter Fadheela Redpath said: “When I came to Gordonstoun the Fire Service was the only service I wanted to join because I felt it really gave me the opportunity to serve the local community, not to mention how cool it is to be trained to fight fires at age seventeen! I have learned how to be a team member from being in the Fire Service and I am learning to be more assertive, and I have had to learn to be louder. In a fire situation, whispering “Water on!” is unlikely to be very effective!  I am hoping to be able to be a volunteer firefighter when I leave Gordonstoun as I want to continue being part of the Fire Service.”

Area Commander Chay Ewing is the LSO for Aberdeen City, Aberdeenshire and Moray. He said: “Being a firefighter is a noble service and profession which teaches invaluable life-saving skills, enhances personal development and encourages strong values of care for the welfare of others. Volunteer firefighters are exceptional individuals who protect their communities when they are needed most and I would like to thank our volunteer firefighters at Gordonstoun for their dedication and commitment. They are a pleasure to work with. We would urge people from all walks of life who have different skills and experience to consider joining SFRS and to play an important role in your local community.”

To find out more about becoming an on call firefighter: https://www.firescotland.gov.uk/careers/on-call/

The Gordonstoun fire unit was started in 1942 by a student after the entire school had been evacuated from Moray to Wales.  The first appliance was an Austin 7 car, painted red and equipped with a ladder, later replaced with a Cadillac. After inspection, the unit was accepted into the National Fire Service and has responded to local emergencies ever since.  Although Gordonstoun’s Fire Service has attended major incidents, such as the Orton rail crash of 1983, students no longer attend call-outs where there is a danger to life. However, the service still plays an important role in assisting with farm fires, wild fires, floods and other emergencies. Some of the first female firefighters in the UK were students in Gordonstoun’s Fire Service in the 1970s.

About The Queen's Award For Voluntary Service:

The Queen’s Award for Voluntary Service aims to recognise outstanding work by local volunteer groups to benefit their communities.  It was created in 2002 to celebrate The Queen’s Golden Jubilee.  Recipients are announced each year on 2 June, the anniversary of the Queen’s Coronation.

Gordonstoun’s Fire Service is one of 244 local charities, social enterprises and voluntary groups across the UK to receive the prestigious award this year.