An Ayrshire firefighter who overcame racism and a lack of opportunities to join the Scottish Fire and Rescue Service has urged others to seize their chance.

Leroy Shaw, 40, grew up in Birmingham in the 1980s and he has spoken of his experiences during October’s Black History Month.

Leroy grew up in an area blighted by racism and where youngsters had limited options, and he didn't excel at school. After going from job to job, Leroy eventually set his sights on becoming a firefighter and fulfilled his dream in 2009.

He said: “Growing up in Birmingham there were certain areas I couldn’t go in, if I went into those areas I wouldn’t be coming out. I’ve been chased out of areas, had to hide and wait for cars to go by. 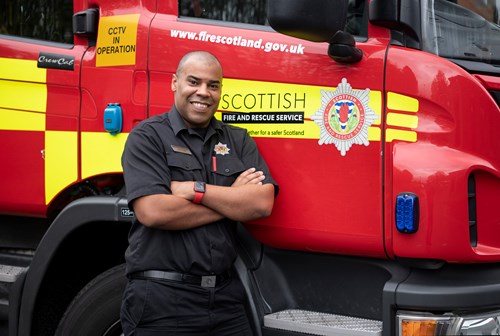 “My only insight to the fire service came from watching London's Burning, which had one black firefighter.

"While at school I didn't really stick in and was a bit of a joker. But when I eventually looked into joining the fire service, I realised I had other skills which would help me become a firefighter." "Where I lived, racism was a problem and, for me, the uniformed services just seemed off limits. You never saw anyone like me in a fire engine - it was always white Caucasian male faces.”

The dad-of-one, who is based at Kilmarnock Fire Station, is determined to appeal to others from under-represented demographics to believe in themselves and consider a career with the SFRS.

Leroy believes Scotland's fire service needs to become more diverse and feels bringing together groups of people with different experiences can only be a good thing.

He said: "I'm the only one of my friends to have joined the uniformed services. It's hard to say why more people from under-represented groups don't apply for such jobs, but kids maybe see the stereotype and think it's not for them.

"It would be good to have more people from different backgrounds with different experiences and it would be nice to see more of a mix. I think that could only be a good thing."

While he has had to overcome challenges, Leroy is now settled and is loving life with the SFRS. 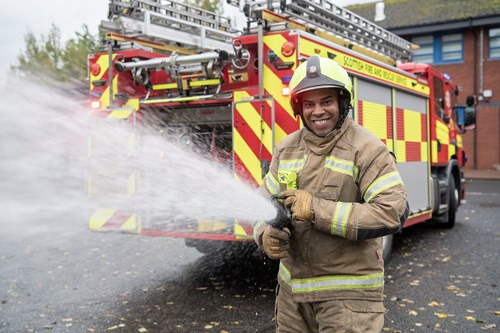 "The bond you have with the people in your watch is special - they aren't colleagues, they're friends. You go through it all together and support each other through everything that happens both inside and outside of work.He said: "Joining the fire service is the best thing I ever did. My only regret is not doing it sooner... this is the only job I've ever had where I hate being off!

"I still don't think people understand fully what firefighters do. It is a very varied role and is expanding all the time.

"All the information is out there, so just go for it. If you believe in yourself and have confidence, you can do it."

Black History Month launched on October 1, with the 2021 theme of ‘Proud to Be’. The campaign called on black and ethnic minority people across the world to share why they are proud to be who they are and celebrate their contributions to their communities and society.

Speaking on what makes him proud Leroy said: “I am proud to be a firefighter and to be a part of something that is bigger than me.”

He said: “Serving Scotland’s diverse communities is an honour, and I am fully committed to advocating for excellent public services that meet the unique needs of different community groups.

“Stories such as Leroy’s allow us to listen and learn through someone else’s lived experience, and hearing these stories is vital to help give us a better understanding. We take this opportunity to listen and learn as we keep working to support our drive to be more inclusive as a Service and as a society.”

The SFRS is currently recruiting for a number of roles -  both operational and non-operational.