A dedicated firefighter who has served and protected his community for almost three decades is now appealing for everyone’s support to help him find new crew members. 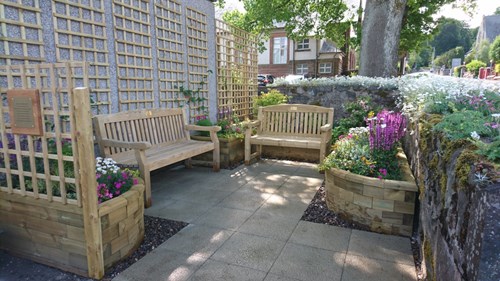 The idea for the Blether Station took root when Janette Barrie of Dementia Friendly Aberfeldy (DFA) was investigating how to make the town more dementia friendly. She noticed when people were out walking they naturally stopped for a breather at the fire station before continuing on their journey.

She suggested placing a bench at the station but the idea grew when she spoke to Watch Commander Matt McLay who invited her to make use of a small piece of unused land beside the building. This led to a project which was overseen by WC McLay and WC Garry West. Garden Designer Ruth Howell developed the space and many local businesses offered their help.

Janette said: “A fire station is seen as a safe place and we’re delighted how this idea grew from the kindness of others. The Blether Station is a wee somewhere to sit, chat and enjoy the plants. Over the last year we’ve seen the impact social isolation and loneliness can have on our wellbeing and encouraging interactions with other people is so important.

“The Dementia Friendly Aberfeldy Collaborative would like to thank Scottish Fire and Rescue Service for allowing us to use the space. We would also like to thank Nicky McDiarmid, Spirit of Wood and Cross Civils and Construction Services for their support and generosity, and The Basil Death Trust for funding the project.” 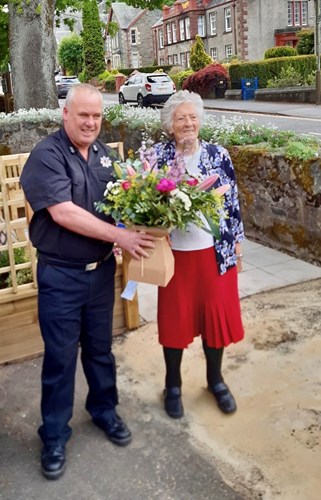 The community effort also involved local school children who will be designing tiles to attach to the trellis and as this develops they can take their grandparents to the garden and show them their work.

Watch Commander Stephen Dolzanski presented ribbon-cutter Miriam with flowers at the launch event as she was unearthed as possibly one of the first guerrilla gardeners. She used to live across the road from the fire station and while out tending her own garden, she would secretly plant flowers at the station – thinking that no-one knew the source of the mysterious plants. Miriam’s clandestine planting continued for around 20 years until she moved to another home in the town. It was a weekend of celebrations for Miriam and husband Alan, as it was their 67th wedding anniversary the following day.

WC McLay said: “The Blether Station is a great example of a community coming together to help others. We’re delighted that this area of rubble has been transformed into a beautiful and useful space. We’re looking forward to seeing people when they stop for a rest and we might even join them for a blether and offer some vital fire safety advice.”