A firefighter has told how he is determined to challenge homophobia and bullying after seeing the devastating effects of hate crime on LGBT+ youth. 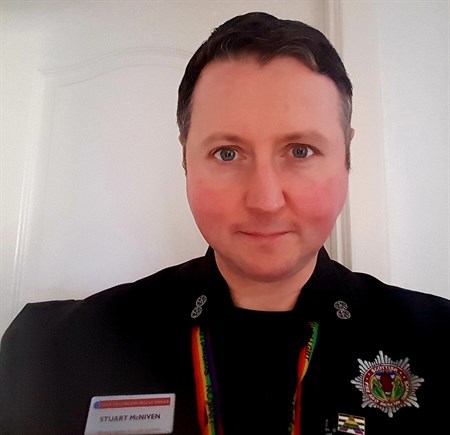 Watch Commander Stuart McNiven is working with the Scottish Fire and Rescue Service’s partners and charities such as LGBT Youth Scotland to tackle discrimination across Falkirk and West Lothian.

Stuart began working with LGBT+ groups in 2017, and saw how offensive graffiti, verbal bullying and discrimination could impact the mental health of young people.

Now Stuart is working closely with LGBT+ youth, to support them in their health and wellbeing, give advice and educate other young people about LGBT+ issues.

He said: “Having family members in the LGBT community might explain it, but when I found there had been a brief, but significant, spike in hate crimes against LGBT+ youths in the area I wanted to get involved.

“There was offensive graffiti and insults being shouted at young people who already had mental health issues and were being socially isolated in one way or another.”

Stuart began working with LGBT Youth Scotland. Scotland’s national charity for LGBT+ young people and play a leading role in the provision of quality youth work for them that promotes their health and wellbeing.

He continued: “We ran awareness sessions around gender pronouns and certain hot topics that were affecting young LGBT+ people, which culminated in an evening at Falkirk Fire Station.

“There were firefighters in attendance that night with more than 25 years’ service and children older than the young people they were learning from. Moments like that leave an indelible mark on you.”

More than three years later, Stuart continues his work as an LGBT+ ally with young members of the LGBT+ community and has joined the SFRS LGBT employee network to help his colleagues too.

Talking about why he joined, Stuart said: “Being a white, straight man, I’ve never had to deal with physical or mental harm because of my gender or sexual DNA. But when you join the fire service, you're driven by a duty to help cure the ills of what causes inequalities in society.

“We don’t have magic wands but we're a motivated workforce with the ability to identify danger, risk or harm and we’re armed with the power to take steps to help alleviate those things.”

In his spare time, Stuart works closely with an LGBT+ youth group in West Lothian called the Glitter Cannons, but says the pandemic has changed how they interact.

He said: “The group is run by some absolutely wonderful people. We had big plans for 2020, which included delivering lots of two-way training, but naturally COVID-19 has restricted what we can do.

“We keep in touch and maintain links to ensure no-one feels isolated, finding time for others during the pandemic can go such a long way.”

In 2020, many Pride events were cancelled or went virtual for the first time. Stuart is on the committee for West Lothian Pride, which went virtual and the service showed great support for the event.

Stuart explained: “Colleagues across the service showed their support for the event, including the Chief Officer whose message went a long way with the audience.”

The role of an LGBT+ ally is different for everyone, for Stuart it’s about being inclusive and supportive.

He said: “Someone once said to me, ‘allies have a far greater impact when it comes to helping the fight for true equality and one can’t take that lightly’, and it’s always stuck with me.

“I would ask others to consider if they could be an ally, and also say to anyone out there who is struggling – there is help available.”