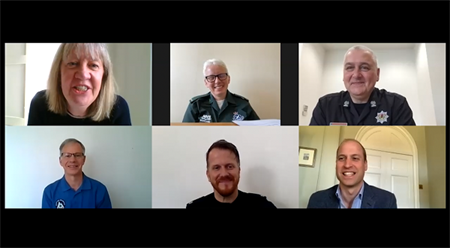 Earlier this month, Prince William spoke with Lifelines Scotland, a charity set up to help emergency service workers enjoy positive mental health.
A small number of emergency service workers met with the prince to discuss the partnership with Lifelines and also the work of their respective organisations. Among those speaking with the Prince was SFRS Deputy Assistant Chief Officer John Miller.
DACO Miller discussed the positive relationship between the SFRS and the charity, as well as the work the SFRS has put into supporting staff to enjoy positive mental health.
Reflecting on the discussion, DACO Miller said: "We had a very positive chat about mental health.
"Prince William has had his own challenges and was very open about his experiences.
"He knew that everyone on the call has had lived experiences of mental ill health and was happy to share his own experiences with us too.
"He is clearly a very caring man and was genuinely interested in what we had to say."
He continued: "It was quite surreal speaking with the man who will be the future king about mental health, but it was a very enjoyable and productive chat.
"I was able to tell him about our work to support staff and the work we have been doing in partnership with Lifelines."
Lifelines Scotland seeks to help individuals and organisations understand how to best protect and support the wellbeing of volunteer emergency responders and blue light workers.
The charity also delivers training to emergency responders on how to best cope with stress and look after their own mental health, and currently provides input to SFRS trainees on week one of their trainee course.
Ends