Success at the Women in the Fire Service Awards

A Scottish Fire and Rescue Service employee says she was left speechless after winning a top award for her work with children. 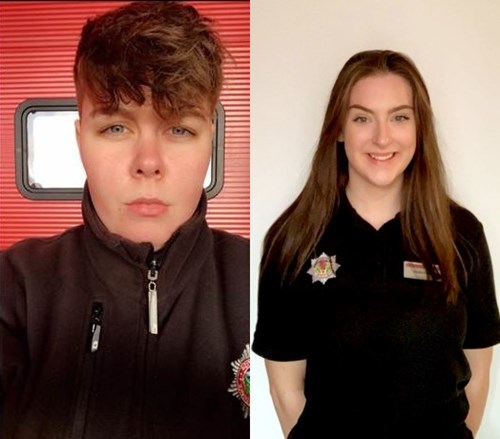 Speaking about her award, proud winner Demi admitted: “I’m overwhelmed and feel so proud of myself for achieving such an amazing award.

Originally starting as a volunteer three years ago, Demi is now a FireReach Instructor based at Coatbridge Community Fire Station.

She taps into her experiences growing up and has an incredible impact on the young people who attend the programme, particularly those who are care experienced.

The FireReach programme has been running in North Lanarkshire for 14 years. It was developed to support personnel to engage effectively with young people, some of whom have come from challenging and difficult backgrounds.

Demi and her colleagues assist them in developing their social and communication skills and self-confidence. They also raise their awareness of fire, road and water safety.

“I knew I was nominated, but never did I think I would have won,” delighted Demi added.

“In my role, I engage with children and young people to raise awareness and to build up social skills. One of the major rewards is seeing their confidence build over the time we have them.

“I love what I do, it’s always a bonus when you don’t feel like you’re working half the time because you’re having so much fun and making people smile.”

He said: “With Demi, I believe her ongoing commitment will continue to give our young people from disadvantaged backgrounds new aspirations and opportunities that will, in turn, create a brighter future for them”.

The Women in the Fire Service awards recognises individuals and organisations that have made outstanding contributions.

Due to the ongoing pandemic, this year’s winners, runners-up and nominees were notified by letter and the announcements made on Twitter.

Runner-up Isla also stood out to the judges in the Young Person Role Model category and was awarded joint runner-up with Kleria Baptista-Mendes of London Fire Brigade.

Isla played a pivotal role in the development of the first national youth volunteer scheme which launched on Wednesday, February 19 at the SFRS HQ in Cambuslang.

Based with the SFRS Youth Volunteer Scheme in Dumbarton, the teenager motivates young people in her local community to be brave and step out of their comfort zones to achieve more.

She said: “A few weeks after the YVS launch, having just finished a 12-hour shift, I was in Dumbarton fire station getting changed into my YVS uniform when I received a call to say that Deputy Chief Officer Ross Haggart wanted to nominate me for the Women in the Fire Service Young Role Model Award.

“I was speechless and couldn’t fully appreciate the magnitude of the nomination. It wasn’t until our Chief Officer Martin Blunden emailed to congratulate me of the nomination, when it finally started to sink in.

“It was a while later before I heard anything else, then I came into work to an email saying I was the joint runner-up, silver award winner.

“I was really shocked and felt so privileged, especially as at this time last year, I was still at school and am now being recognised as a young role model within the fire service community.”

She added: “It’s such a phenomenal achievement which I’m so honoured to even have been considered for, given the competition and environment we are in.”

Megan Taylor is the National Community Safety Engagement Team Leader for the SFRS.

She said: “Isla’s commitment and dedication to the SFRS has motivated young people to become role models within their own communities whilst developing life skills.”

Chief Officer Blunden said: “I’d like to congratulate Demi, Isla and Karla. I’m also incredibly honoured to be nominated for an award alongside so many inspirational people.

“It’s a proud day for the Scottish Fire and Rescue Service. Our mission across the service is to ensure that women, like Demi, Isla and Karla, can truly thrive and reach their potential.

"So we are working hard to develop a lasting culture of equality so that women who choose a career in the fire service get the same opportunities to succeed.

"I am proud that my colleagues have been recognised for the incredible work that they do and I am delighted to be their ally."