Anniversary of death of James Braidwood

Today marks the anniversary of the death of James Braidwood, who is regarded as the “founding father” of the modern Fire Service. 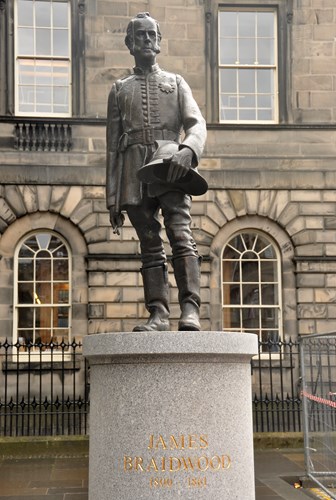 Last year, delegates from the Scottish Fire and Rescue Service attended a special memorial event in Fortrose in the Highlands to commemorate his life, organised by Braidwood’s great, great, great granddaughter, Diana Hamilton-Jones.

Guests included local SFRS crews from Fortrose and nearby Cromarty Community Fire Stations, Deputy Assistant Chief Officer for the North of Scotland David Farries, his father Watch Commander Dave Farries, and its Chaplain, Christina McCrae, who performed a reading on the day.

Unfortunately, this year’s memorial service, due to be held once again at St Andrews Episcopal Church, has had to be cancelled – however Ms Hamilton-Jones and family hope to make this an annual event in the future.

“He was a pioneer and pathfinder of his time, who had an unwavering commitment to public safety.

“Indeed, Scotland has a distinguished and dramatic firefighting history, and we are absolutely committed to preserving and celebrating our heritage.

“We take great pride in the fact that the world's first municipal fire service was formed in Edinburgh. Today, we will pause to remember the legacy of Mr Braidwood as we mark the anniversary of his tragic and untimely death.”