Two Operations Control room staff, who work quickly and effectively to protect the public at times of need, have been shortlisted for a national award. 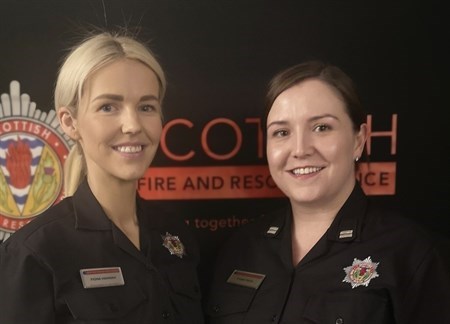 Crew commander control Fiona Price, 35, and firefighter control Fiona Hannah, 32, receive 999 calls to the Scottish Fire and Rescue Service, from their Operations Control room, based in Johnstone, Renfrewshire, and mobilise resources to incidents across the west of Scotland - from Lochgoilhead to Lockerbie.

They have been shortlisted for the Award for Services to the Public for their incredible behind-the-scenes work.

Fiona Price, crew commander control with SFRS for six years, said: “We are often faced with difficult situations. Each time you start your shift, you are never quite sure what’s ahead of you, but we pull together as a team and meet any challenges that come our way. Fiona and I are humbled to be considered for this award.”

The APD Control Room Awards 2020 shine a light on individuals and teams who go above and beyond in their roles every day and are the only accolades of their kind to recognise such work across the UK. A total of almost 400 nominations were received from 80 organisations for the 2020 awards, which are in their third consecutive year.

Fiona Hannah, who’s been a firefighter control, with SFRS for four years, said: “I am really pleased to be shortlisted for this award. Working in the control room takes a lot of knowledge, skills and expertise to ensure our operational firefighters respond quickly, while also supporting and reassuring members of the public."

Paula Holden from Merseyside Police and Gail Oliver from Durham Constabulary are also nominated in the same category as Fiona Price and Fiona Hannah.

The awards are run by APD Communications, which develops critical, life-saving software used by the police and other emergency services organisations, as well as transport and aviation operations nationally and internationally.

The awards ceremony will be taking place at Jury’s Inn, Hinckley Island, Leicestershire, on March 5.

“They are both an example of how committed control firefighters are to protecting our communities in often quite difficult emergency situations.

“I would like to thank each of them for their dedication and professionalism.”