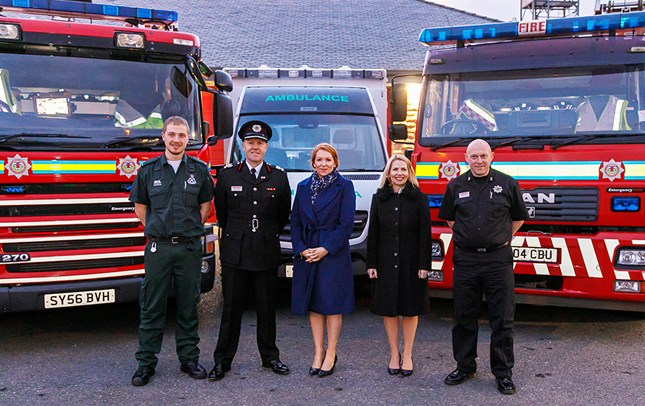 A purpose-built station for blue light partners in Shetland, which is the first of its kind on any Scottish island, has been officially opened.

The impressive facility in Lerwick, which was refurbished between June and September 2018, represents a £350,000 investment from the Scottish Ambulance Service and the Scottish Government.

The fire station on the Sea Road site, which originally opened in 2003, remained operational throughout the building work.

The layout of Lerwick Community Fire and Ambulance Station was developed in consultation with both services to achieve a modern, integrated and efficient facility that benefits the whole community.

“I was very pleased to have the opportunity to open the newly refurbished Lerwick Fire and Ambulance station.

“This co-located facility, the first of its kind on a Scottish island, establishes a modern, integrated, efficient and effective way of working that benefits the people at the heart of our island communities. It’s a great example of joined up working between our emergency services, and I look forward to more of this type of initiative to enable our public services to deliver better outcomes for the people of Scotland."

24 retained personnel from the Scottish Fire and Rescue Service based at the site respond to over 200 calls per year.

SFRS Chief Officer Martin Blunden said: “This tremendous facility, which serves mainland Shetland and its outer islands, allows both emergency services to plan, prepare and respond in an effective and cohesive way, for both local needs and to operational incidents, to ensure local communities are well protected.

“The benefits are already tangible as we know that joint training over the last year has improved awareness and understanding of each other’s capabilities and protocols. This means that we are providing the highest quality of response to those that require our assistance."

“The new station is the result of considerable hard work and the station has been reconfigured and designed to meet all the Ambulance Service needs.

“It is a significant improvement that supports ongoing operational and clinical skills development and the facilities are of the highest quality and meet all of the stringent NHS hygiene standards.

“This co-location development is part of an investment strategy to upgrade our stations across the country and to support more joined up working between partners. The new station also supports the needs of our staff and patients by delivering the highest standards of clinical care, as well as providing a multipurpose hub for the local community."