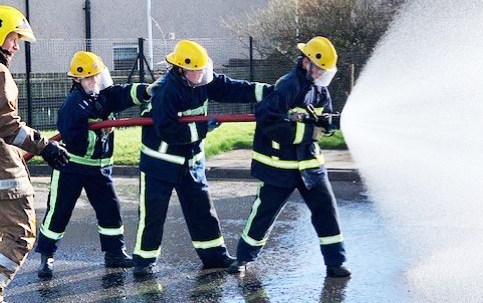 Firefighters have helped drive down antisocial behaviour following a spike in deliberate fire-setting in the Levenmouth area of Fife.

Levenmouth saw a significant rise in fire-setting and various other forms of antisocial behaviour during 2018.

Many of the incidents related to secondary fires involving items like bins.

The rise in figures sparked a joint crackdown by the Scottish Fire and Rescue Service, Police Scotland, Fife Council and various community groups.

Working under the “Improving Levenmouth Together” banner,  SFRS Station Commander Steven Michie helped draft plans to engage with communities and to prevent fire-setting.

He revealed: “We had a significant challenge here around deliberate fire-setting and antisocial behaviour.

“While other areas were recording a decrease in fire-setting and antisocial behaviour, Levenmouth was experiencing a rise.

“It’s always a tiny fraction of any community who commit such acts, but as a national service we’re committed to keeping all of our communities and staff safe.

“In Levenmouth, we realised engagement and enforcement had to go hand-in-hand.

“So, while we always work closely with partners, the decision was taken to share intelligence and best practice with a wide variety of groups in an effort to tackle these issues.”

The joint approach saw emergency services and key partners share intelligence and resources to engage with communities and target those responsible for starting fires and engaging in antisocial behaviour.

By working together, the steering group was able to help achieve a sharp reduction in activity.

Members of the group have since been invited to share insights and experiences with services from other areas.

Station Commander Michie explained: “By working extremely closely with our police, local authority and third sector partners, we have managed to drive figures down.

“It’s obviously pleasing to note there has been a sharp decline in fire-setting and antisocial behaviour, but we’ll never be complacent.

“A big thank you to all of our partners, but also to the local community and young people in the area, who have worked closely with us in an extremely positive fashion.

“By working together we can all make communities safer and limit antisocial behaviour.”