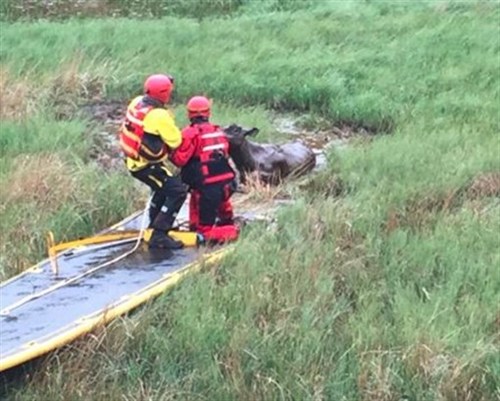 Firefighters rescued a stricken cow from marshland – moments before it disappeared.

Crews used specialist equipment, including an inflatable walkway, to lead the trapped animal to safety after being alerted to its plight.

She said: “This was a real team effort.

“The cow was well and truly stuck in an area of marshland- we could only see its head when we first arrived.

“We are a humanitarian service, so we were keen to remove it safely.

“We used specialist equipment to help lead the animal to safety and worked with our water rescue colleagues, who installed an inflatable walkway.

“After a while, the cow began to make its way out of the marsh.

“Eventually, we managed to get it out and were delighted when the vet on site said it was healthy.

“This was a combined effort and we are delighted that we were able to assist.”