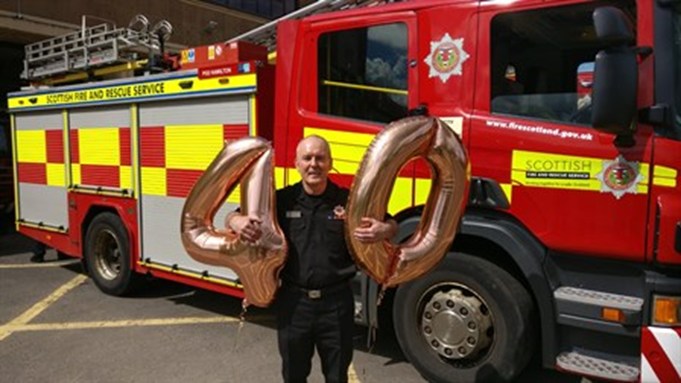 A firefighter has been honoured after marking his incredible 40 years on the frontline.

John Devine began his career with the former Strathclyde Fire Brigade in May 1979 – and has served the entirety of his four decades at Hamilton Fire Station.

The 62-year-old was joined by family and colleagues last week at the Bothwell Road station to celebrate the milestone anniversary.

John said: “I’m very proud to have reached the 40-year mark, and having been lucky enough to do the job that I love for so long.

“I’d like to thank my colleagues and the Scottish Fire and Rescue Service for organising this event – it’s been a day to remember.

“To be honest, I can’t quite believe that’s me hit the 40 mark, but I wouldn’t swap it for the world.

“I’ve loved this job since day one, met some brilliant people, and made a lot of good friends during my time.

“When I first applied, I was working in a warehouse and just needed something new, and I’ve never looked back.

“I lived in Motherwell near the station, and I used to see the appliances going back and forth. It always impressed me, and it was always in my mind that I could maybe give it a go.

“I remember my first shout was a special service during a time of bad flooding. We rescued a young boy who had become stranded on an island on the River Clyde.

“I’ve had a few strange and sizeable jobs in my time which include a nightclub in Keith Street Hamilton about 20 years ago with a number of rescues. That one stands out.

“I’ve even rescued a cat off a roof, would you believe. That old cliché!”

LSO Fairbairn said: “John is an absolute credit to his profession, to his team in Hamilton Fire Station, and to the Scottish Fire and Rescue Service.

“He has undoubtedly seen many changes during his long and distinguished career, but one thing that hasn’t waned is his commitment keeping others safe, and giving back to his community.

“A huge congratulations to John on an incredible service.”