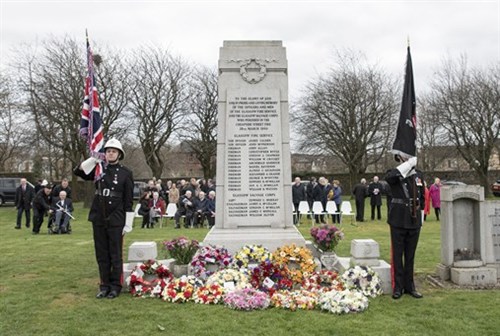 The Scottish Fire and Rescue Service today remembered the sacrifice of 19 firefighters who lost their lives during the Cheapside Street disaster.

On the evening of March 28, 1960 crews were mobilised to a fire which tore through a whisky bond warehouse, causing an explosion which sent 20 metre walls crashing to the street below.

Fourteen Glasgow Fire Service and five Glasgow Salvage Corps members lost their lives as they worked to protect the public from the inferno.

It was, and still remains, the largest peacetime loss of life ever suffered by the United Kingdom’s fire and rescue services.

A memorial ceremony was held on Thursday, March 28 at Glasgow’s Necropolis to mark 59 years since the tragedy and to honour those who perished.

Speaking after the moving event, SFRS Chief Officer Martin Blunden said: “Those firefighters lost their lives protecting others – it is a shining example of duty done to the utmost, of courage undaunted by danger or self-sacrifice.

“It is hugely important to me personally, to the Service and to the people of Scotland that we remember the bravery of all of those involved.

“My thoughts today are very firmly with each and every one of those men, their families, friends and loved ones.”

Chief Officer Blunden continued: “Since the Second World War, more than 300 firefighters have lost their lives in the line of duty in the UK– each loss reminds us of the dangers firefighters face each and every day.

“It is of the utmost importance that we mark the contributions and sacrifices of all of those who have gone before us.

“Firefighters exist to help keep communities safe. It is that drive to be there for others that inspires men and women to join fire and rescue services the world over.

“They stand on the frontline knowing that they may be asked to enter harm’s way to help protect others – that is what makes our firefighters, Operations Control staff and our emergency service partners so extraordinary.”