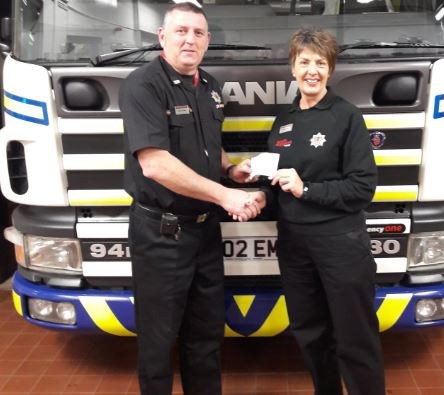 Firefighters in Buckie have handed over a hefty £9000 to charities and local causes.

The heart-warming gesture was organised by crews after they raised funds throughout the year.

Staff at Buckie Fire Station have a long history of charity work and have donated tens of thousands of pounds to charities including the Fire Fighters Charity and SFRS Family Support Trust over the past 12 years.

To raise the impressive sum, Buckie firefighters took part in a range of efforts including open days and community car washes.

They also organise an annual festive-themed tour around Buckie, which has become synonymous with local festive celebrations.

Watch Manager Dougie Annand has helped to organise the station’s charity efforts since 2006.

He recently arranged for representatives from a number of charities and local causes to attend Buckie Station to collect the generous donations.

Watch Manager Annand, who plans to retire later this month after more than three decades of protecting communities, says he will savour the memory of the gathering long after he hangs up his helmet for the last time.

He said: “It was a lovely experience and thank you to everyone who came along.

“We have of course always wanted to help support causes like the Fire Fighters Charity, but we have always been very keen to show support and help local people and causes too.

“Everyone coming together was very nice and it’s definitely a lasting memory to have and to take away from my time with the Service.

“I wanted to sign off with one last charitable event and the station and local community has helped us achieve that.”

The experienced Watch Manager added: “The community of Buckie have been amazing and have always stepped up to help us.

“I’m very proud to have helped protect communities for more than 30 years and to have played a role in helping to support so many worthwhile causes.”

Ian Findlay is the Scottish Fire and Rescue Service’s Local Senior Officer for Aberdeenshire and Moray.

He said: “The commitment displayed by all at Buckie Fire Station to raise funds for charity is remarkable.

“Their sustained determination to help charities close to the heart of every firefighter and local causes and people is something which deserves to be celebrated.

“A big thank you to everyone who came along to this memorable gathering.”