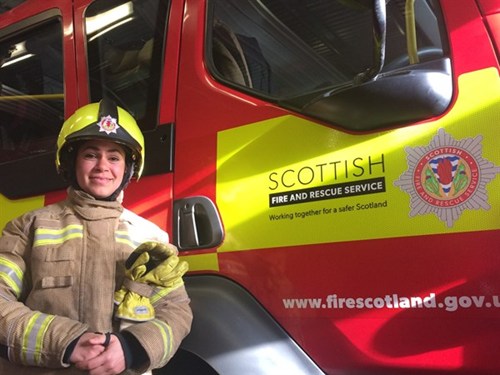 A firefighter has told how she worked to protect the public at a devastating fire that claimed the lives of hundreds of people.

Clara Kay was a volunteer firefighter in her native Paraguay when the tragedy struck at Ycuá Bolaños supermarket in Asunción on August 1, 2004.

It led to the tragic deaths of 300 members of the public. A further 200 people managed to escape with the assistance of emergency services.

Clara recalls the horrors and vivid memories from her homeland 14 years ago that continue to haunt her to this day.

The mum, who is now a full time firefighter living in Dunfermline, Fife, spoke as The Scottish Fire and Rescue Service launched a national recruitment campaign.

She said: “I couldn’t sleep for a week – it was all I could see when I closed my eyes.

“I had only been volunteering as a firefighter for about a year and had never seen anything like it – it wasn’t anything I had trained for.

“The people who survived were underneath the dead and there were so many bodies, including some children.

“We had to move them to a temporary mortuary which was just horrific. We did get trauma counselling afterwards and that did help a bit.”

Clara eventually left her native Paraguay and her job as an educational psychologist and volunteer firefighter after meeting her husband.

But she had to try four times to land her dream job with the Scottish Fire and Rescue Service.

The mum of two, aged 38, said: “When I came to Scotland I applied to join but I failed the bleep test – it was all so different from being a volunteer firefighter in Paraguay.

“It was easy to get into the Paraguan service but I had a lot to learn here to get through the tough process. We need to hit the standard to ensure we are safe to respond and protect the public.

“I was determined so I worked on every weakness which had been highlighted through previous attempts to get through. I went to college to improve my maths and I also improved my English.

“My husband David is in the Service so he gave me lots of encouragement and support.”

Clara, who also volunteers with the Coastguard, left her homeland in 2009 to be with David.  They met when he came over to Paraguay with volunteer organisation International Fire and Rescue Association (IFRA) and dated for two years long distance before deciding to get married and move to Scotland.

She said: “It was hard leaving a job I loved and my friends and family but I love Scotland – especially the autumns and summers.

“This is my home now and I love it.

“Myself and David are on opposite shifts which is great for child care.  Sometimes we have to swap over in the car park when he starts his dayshift and I come off nightshift.

“We are still able to spend plenty of time together so it works well.”

Clara encourages others to think about signing up with the Scottish Fire and Rescue Service.

She said: “I would recommend a career as a firefighter because it is a very rewarding and fulfilling career.

“Faith, determination and hard work were key to my success.  I honestly think it is the best job in the world.

“My kids are proud to say I am a firefighter and I am proud to be one.”

If you are inspired by Clara’s story and would like to have a career at the Scottish Fire and Rescue Service, visit  /work-with-us/wholetime-firefighter-recruitment.aspx

Our recruitment campaign opened on 21 March and everyone has several weeks to apply.