A current Assistant Chief Officer and a retired Area Manager are to be awarded Queen’s Fire Service Medals for distinguished Service.

John Dickie and John Joyce were honoured as part of the Queen’s birthday honours and will receive their medals at a ceremony in Buckingham Palace in the coming months.

Assistant Chief Officer John Dickie is currently the Director of Response and Resilience and has served communities for more than 29 years.

He joined Strathclyde Fire Brigade in 1989 then went on to work for the British Airports Authority Fire Service and latterly Lothian and Borders Fire Brigade.

When the Scottish Fire and Rescue Service was formed in 2013, Mr Dickie took up a role as the first Local Senior Officer for the Edinburgh area before moving into his current department as an Area Manager before working his way up to Assistant Chief Officer.

Speaking after his announcement he said: “I feel very honoured and humbled to receive this award.

“This is a proud moment for me and it will be a special experience to receive the medal at the ceremony in London.

“I want to thank my family and friends for the support they have given me over the years and also to the staff I have worked with throughout my Service.” 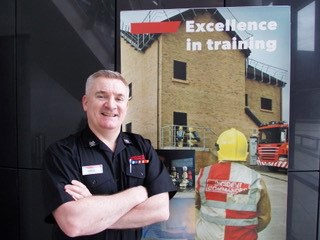 He joined Strathclyde Fire Brigade in 1989 and served many different roles within local areas, departments and training.

Notably, Mr Joyce led a project team that helped plan the construction of a new training centre in Cambuslang – this site is now the National Training Centre and the Scottish Fire and Rescue Service’s Headquarters.

After the amalgamation of the eight former fire services in Scotland John held the role as Area Manager within the response and resilience directorate and attended high profile incidents such as Blochairn Fruitmarket, Stobhill Hospital and the Glasgow School of Art fires.

He said: “I have always been very proud being a Firefighter and Officer. It truly is a great job that allows you to help people when they need it most.

“Receiving this award is an honour and it has been a privilege to serve alongside firefighters, support staff and Operations Control colleagues – they have helped me achieve this award.

“I also couldn’t have done it without the help and support of my family and friends across 30 years.”