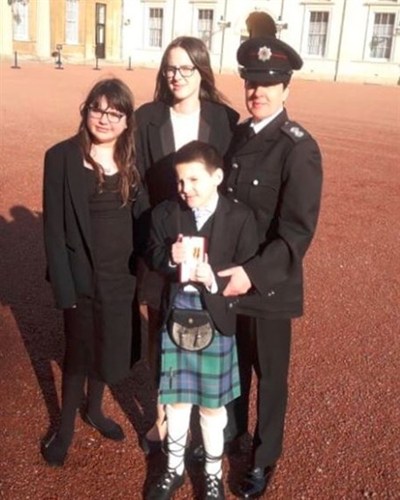 A dedicated firefighter has received royal recognition for helping to protect her community for more than two decades.

Rosie followed her dad into the Service and until recently worked alongside her husband, brother and sister.

In recognition of her tireless community-driven work, the long-serving firefighter was recently invited to Buckingham Palace where she was presented with the Queen’s Fire Service Medal by the Duke of Cambridge.

Fresh from receiving her accolade, a delighted Rosie revealed Prince William praised the work of retained firefighters across Scotland.

She said: “Prince William presented me with the medal and asked me about what part of Scotland I was from and also praised the work of retained firefighters in rural communities.

“He was lovely. My husband said we were talking for ages.

“It’s been a very exciting week and I’ve got memories that will last a lifetime.

“Buckigham Palace itself is unbelievable. We were walking around the place gobsmacked.”

Rosie received word in June that she was to receive the QFSM and dedicated the award to all of Scotland’s retained firefighters.

The Watch Manager lives in the remote Highland village of Kilchoan, which is located on the Ardnamurchan peninsula - the most westerly village in mainland Britain.

The hard working mum of three revealed she has been inundated with messages of support since picking up her award.

Describing the experience as “surreal”, Rosie revealed: “The experience is something you struggle to describe. It’s surreal.

“The presentation was in the ballroom and I was last on the list. I was beginning to worry that I wasn’t going to be called!

“But everything was amazing and we were made to feel so relaxed by the staff.

“There’s been lots of cards and nice messages from the community.”

She added: “It was a fantastic experience. We had a ball.”

Are you inspired by Rosie’s story?

For more information on what it takes to become a retained firefighter visit https://www.myjobscotland.gov.uk/emergency-services/scottish-fire-and-rescue-service/retained-firefighters