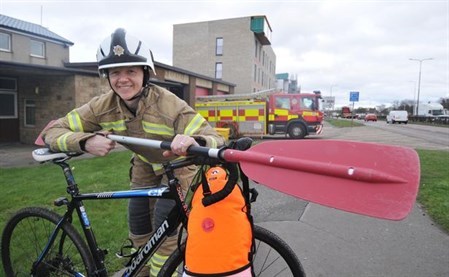 Firefighter Les Mason is about to take on the greatest physical challenge of his life as he looks to become the first person to run, swim, kayak, cycle and climb the width of Scotland in a single day.

Les, 38, has organised the Chasing Our Rainbow trek to "take on nature", as he and wife Alana have sadly suffered four heart-breaking IVF miscarriages in recent years. He has raised more than £2,000 (and counting) for miscarriage and stillbirth charity Tommy’s.

The super-fit Watch Manager will begin his 125-mile journey at the east coast in Montrose on Wednesday night and will aim to reach the waters of Loch Linnhe on the west coast within 24 hours - travelling across some of the most challenging terrain that Scotland has to offer.

He said: "It's been a long, intense training regime - sometimes training up to three times a day - but I've been fortunate with the weather and managed to stay free of injuries.

"To be honest, the training has probably been the easy part - the biggest difficulty has come with the logistics, and organising such a massive and varied project.

"But I've been incredibly lucky in the support I've had from Alana and a former firefighter friend Lee [Peyton, who runs Breaking Strain Events], and others.

"The biggest difference with this, compared to previous events where I've supported other people, is that this one is very personal. That's added an extra pressure."

Les, based at Sighthill Fire Station in Edinburgh, added: "I've now entered the taper stage and I'm beginning to feel the nerves now.

"I feel like I'm as physically fit and prepared as I can be, but I am also very aware that I am at the whim of the weather. One strong head-wind could have a significant impact.

"I just need to take confidence from the fact that I've put the training, and we've planned everything down to a tee. We've planned and mitigated for anything that could go wrong.

"We've also got the support of the Scottish Fire and Rescue Service, in being able to use Montrose, Pitlochry and Kinloch Rannoch fire stations as check points along the way. It's a great weight of my shoulders knowing that my support team will be looked after by the crew at each station."

Les said previously of his epic charity challenge: "This is the first time this unique route has ever been attempted. It’s my way of sticking a finger up at mother nature. When it comes to miscarriage, she calls the shots so this is a way for me to take on mother nature and win.

"Losing four babies has been tough but we got through it and I will do this.

"After each of our losses, I felt like a failure and ashamed for not being able to keep my baby safe when I spend my days saving the lives of others and keeping the public safe.

"I was a helpless passenger just watching events unfold. Doing this challenge is a way for me to regain control and help others facing the trauma of miscarriage."

Les offered a heartfelt thanks to those that have supported him in his training and planning for his Chasing Our Rainbow challenge.

"I can't thank everyone enough, from Alana and Lee for their absolute support in helping me get to this stage, as well as our friends, family and colleagues within the Scottish Fire and Rescue Service.

"I'd also like to thank our main sponsors, Glenturret whisky, who are covering the cost of our vehicles and transport, the clothing, and accommodation for the whole team in Glencoe."

You can support Les's charity fundraising efforts for Tommy’s here