Firefighter inspired by dramatic rescue to join SFRS is encouraging others 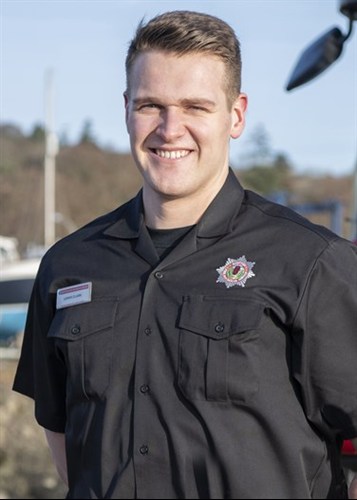 A FIREFIGHTER who was inspired after watching the dramatic rescue of a dog from a burning building is encouraging others to follow in his footsteps.

Encouraged by his firefighter grandfather, Lewis Clark joined his local young firefighter course at the age of 14, and became a retained firefighter in his last year of high school.

Now, he says he is living his “dream life” after joining his hometown Helensburgh Fire Station as a wholetime member of the crew.

Lewis is speaking out after the Scottish Fire and Rescue Service has launched its #BreakTheMould recruitment campaign, encouraging people from all walks of life to apply and become wholetime firefighters.

“He started in Edinburgh and he finished as a senior officer – equivalent to a Group Manager.

“I’d always grown up wanting to be like grandad.

“One night I was staying at my gran and grandad’s and I remember there was a fire just across the street.

“I was reading a book before going to bed and then my grandad says ‘get your slippers and dressing gown on, there’s a fire over there’.

“I always remember a firefighter coming out the window, smoke everywhere, and he comes out carrying a dog down the ladder.

“I said then ‘that’s definitely what I want to do’.”

After working in Waitrose part time for five years, while being a retained firefighter, Lewis took the plunge and on his second attempt made it through to the gruelling 14-week training course to become a wholetime firefighter.

But the dad-to-be admits the training was tough – even with previous experience - and especially in the summer sun.

He said: “The course was brilliant, I think I lost 5kg in the first three weeks, running out ladders and things like that.

“You were out constantly, and we got in in the heatwave as well.

“You’ve got the kit, so you’re already sweating, plus you’re in a 30 degree heatwave for about 13 weeks and then on the week of the graduation it starts raining!

“Everything was real, real fires. You were constantly going into heat. Their mentality was there’s no point in training us in an environment you’re not going to go into.

And when he graduated, it was made all the sweeter by the news from girlfriend Jennifer that he was about to be a dad.

He said: “The night before it I found out I was going to be a dad and then passing out to do my dream job. I always wanted to be a firefighter so passing out is your first step - it was a good day, a proud day.”

Now standing on the frontline to protect communities, Lewis is keen to remind people that there is more to the job than meets the eye.

In conjunction with being a wholetime firefighter and retained crew member, Lewis has also progressed to become a trainer for the same young firefighter units he joined nearly eight years ago.

And helping the next generation to go on to a positive future, while passing on vital safety advice, is something he takes great pride in.

He said: “It’s really rewarding. You could potentially be saving a life because they could be going one way and you’re trying to show them a bit of discipline and respect while giving them future lifestyle so to speak.

“It’s like any job, it’s not just what you see on the tin… there’s a whole iceberg and you only see so much of it, there’s so much you don’t see.”

And Lewis has some simple advice for those who do apply, saying: “Do it. Commit to it. Immerse yourself in it. Embrace it.

“Fully embrace yourself, take everything from it – if you can meet the standards then it’s there to be taken.”

Scottish Fire and Rescue Service Director of People and Organisational Development Liz Barnes said: “We are a Service that prides itself on working at the very heart of our communities to keep people safe and it is therefore imperative that we reflect the diversity of those communities.

“We are actively reaching out through our #BreakTheMould campaign to welcome and support people to take that first step.

“But let me be very clear – there are no quotas here and no one has any advantage. You will have to hit the standard for your application to be accepted so I would advise everyone to give it great thought and consideration. I would urge those who are interested to also follow our dedicated social media accounts.

“This is an exciting time and we are very much looking forward to welcoming the next generation into a Service that is seeking to do so more for the people of Scotland.”

Apply for the role at https://www.myjobscotland.gov.uk/emergency-services/scottish-fire-and-rescue-services

For detailed information on the role and what will be expected of applicants, visit /work-with-us.aspx