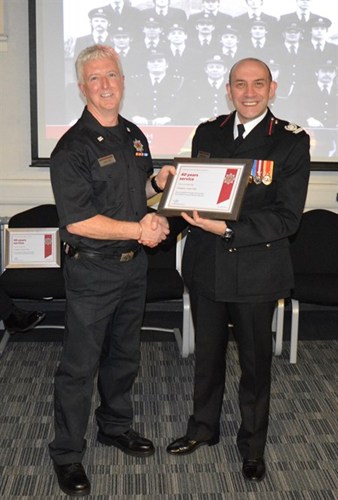 Two men who became firefighters on the same day have been honoured after dedicating a combined eight decades of their lives to helping to protect communities.

When Jim Cuffe and Tam Finney picked up their helmets for the first time, the UK had narrowly escaped the grip of a full scale industrial revolt and Scotland was still recovering after an embarrassing exit from the World Cup in Argentina.

The duo began their careers at Renfrew Fire Station and, after three months of training, became fully fledged firefighters on March 16, 1979.

Having completed his training, Tam was dispatched to Port Glasgow’s White Watch, where he’s spent the last 40 years.

Jim was initially based at Port Glasgow before being transferred to Greenock, where he’s remained since.

A butcher by trade, Jim, 59, has been in the Service long enough to seen his son, Ross, follow in his footsteps and become a Crew Manager.

The dad-of-two became a firefighter at 18 and admits he still gets an adrenaline surge out of his job more than four decades on.

A wholetime firefighter for 34 years, Jim planned to retire from firefighter life before seizing the opportunity to join the SFRS retained ranks.

He revealed: “Tam and I were at training school together – he’s an absolute fountain of knowledge.

“We’ve both seen a lot of changes within the job and will always reminisce with each other when we meet at incidents.”

Jim continued: “I’d have to say I still get an adrenaline surge from attending incidents and from working with the rest of my watch.

“I enjoy passing on the skills I’ve learned from my time as a firefighter to new recruits.

“When I first joined I’d always sit with the older guys and try and pick up little nuggets of information from them that could help me out at an incident.

“You’re always learning in this job – there’s always new stuff that creeps up.”

Sixty-three-year-old Tam is a qualified lorry driver and in 2009 was presented with a commendation after helping to rescue several of his neighbours from a flat fire.

Tam spent 31 years as a wholetime firefighter before embracing retained life in 2010.

The experienced firefighter views sharing his knowledge and skills with younger firefighters as a “duty”.

He revealed: “The 40 years have gone past in the blink of an eye.

“Jim is an absolute gentleman and we've both seen a lot down the years, but becoming a firefighter is the best move I ever made.

“It’s a privilege and pleasure to still be involved. I consider this the best job in the world.

“I believe, as experienced firefighters, we have a duty to pass on what we have learned down the years to new recruits.

“Hopefully I am in a position to do that.”

Praising the outstanding commitment of both firefighters, DACO Heath said: “Both Tam and Jim are an absolute credit to their profession.

“When you hear stories like theirs you can’t help but feel inspired and proud to be part of the SFRS family.

“Tam and Jim will have seen many changes during their careers, but the one thing that hasn’t waned is their commitment to helping to keep others safe.

“The fact that both men became firefighters on the same day makes this an even more remarkable story.

“A massive congratulations to both men.”