Firefighter to revisit scene of disaster to share life-saving skills

John Aitchison will revisit the scene of a devastating earthquake in order to share life-saving skills and expertise with his Nepalese counterparts. 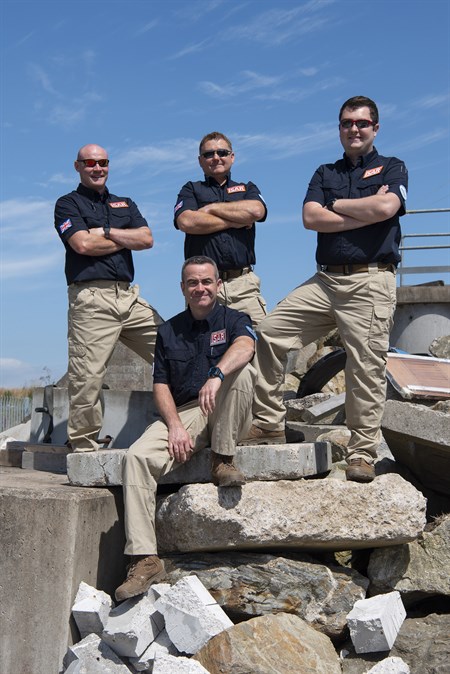 John Aitchison (front centre) will travel to Nepal with his ISAR colleagues.

An Aberdeenshire firefighter who provides life-saving intervention work at disaster sites across the World insists he is not a hero.

John is a retained firefighter, but also works as a trainer, specialising in Urban Search and Rescue (USAR) work at the SFRS’s Training Centre in Portlethen.

He leads the Scottish side of Operation Florian, a humanitarian group, set up in 2008.

John is also a Team Leader with the UK’s highly trained International Search and Rescue Team (ISAR), who are mobilised to disaster sites around the globe to utilise their search and rescue skills.

One of John’s most challenging international missions was a 2015 visit to Nepal following an earthquake which sadly claimed the lives of 9000 people and left thousands stranded.

As part of Operation Florian, John and other emergency service staff will return to Nepal in November to begin training Nepalese firefighters to carry out their own safe and effective urban search and rescue operations.

Joining John on his trip will be a trio of Dundee-based firefighters and UKISAR experts, Watch Manager Daniel Gall and firefighters Steven Adams and Jed Smith.

James Woodsell, from the North West Ambulance Service, will also play a vital role in the group’s humanitarian efforts.

John hopes the charitable work will result in Nepalese emergency services being in a better position to respond in the event of any future natural disaster.

He revealed: “When you get a shout in Scotland, you have a lot of fire engines behind you. But out in Nepal, it was me with a small first aid kit and my knowledge.

“There was a lot of frustration for me that I wasn’t able to do more, and that was what drove me to go back.

“It was almost something inside me - being a firefighter and feeling like you haven’t done enough.

“There is a great expectation when people see us, part of the SFRS, coming across as one of the world’s leads.

“They (Nepalese emergency services) expect us to provide them with a quality service, which we do.

“They know all about the SFRS and respect us greatly – they are very eager to get us across to train them.”

John’s first trip with Operation Florian came in 2008 with a visit to Macedonia.

In the decade since, he has made numerous overseas trips with the charity – providing emergency workers with equipment and expertise.

While his 2015 visit to the recently-struck Nepal left him “rocked”, John admits he is relishing the prospect of being able to revisit the country and pass on in-depth knowledge and expertise to his Nepalese counterparts.

For that reason, John is only too aware of the benefit of sharing his USAR knowledge and expertise.

He said: “When I was over there after the earthquake in 2015, I was taken aback by it all. The destruction was on a mass scale – everywhere you looked was flattened.

“I think everyone was in shock and awe because we were looking at whole villages wiped off the map.

“One of my jobs was to go out into the hills and count how many people had died, how many were still alive and what aid was needed.

“When I arrived I could see scars in the landscape and could tell quite quickly that there used to be a wee town up there.

John continued: “As part of this project we will be training people, who will in turn train others – it’s a cascading effect and you can have a massive impact on a country’s infrastructure.

“When I was over last I carried out a needs analysis and the biggest thing people said they required was urban search and rescue training.

“There is a pressure involved in delivering this, but it is something I enjoy.

“Nepal is very personal for me because I was out there after the disaster and this visit will let me tie up some lose ends and put some things to rest.

“If you speak to any firefighter they will tell you that this is why they joined the fire service, they wouldn’t be in the job if they didn’t want to be a humanitarian and help people.

“Firefighters don’t do these things for medals. “

John is currently on the look-out for redundant firefighting equipment which he can pass to crews in Nepal.

He said: “We are on the look-out for things, bits of kit, which are no longer useful for the Scottish Fire and Rescue Service, but may be useful for people in Nepal.

“If people want to assist then they can approach myself or visit our website.

“There is a lot of work to be done here.”

For more on John’s mission and to donate click here