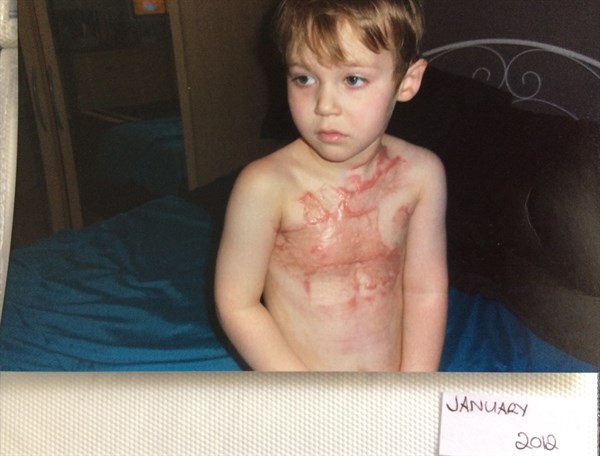 AN ex-nurse has relived the horror moment her son was left scarred for life after being badly injured by a rogue firework on Bonfire Night.

The auxiliary nurse immediately dashed along corridors to the hospital’s A&E department so that she could meet the ambulance when it arrived.

And she remained with her son throughout the next three weeks as he underwent painful skin grafts across his neck and chest before being finally released.

Amy paid tribute to Ben as he issues a stark safety warning ahead of this Bonfire season.

She spoke out as the Scottish Fire and Rescue Service launches its bonfire safety campaign – urging communities to attend organised displays.

Her world crumbled when she received the telephone call from husband Alan on November 5, 2011 just moments after reporting for duty at the hospital in the city’s Yorkhill.

Alan and Ben had been marveling at the fireworks from the safety of their cul-de-sac when the stray firework struck.

Amy recalled: “The firework headed straight for Ben and went into his shirt which then caught alight.

“He was screaming so loud and no one could believe what had just happened.

“Alan put him into a cold bath until the ambulance came – there was nothing left of his shirt.”

Amy, who was an experienced nurse, told how she battled to maintain her composure after hanging up the phone and dashing through the hospital to meet the ambulance carrying her son.

Her son was left drifting in an out of consciousness after suffering the nine per cent full thickness third degree burns across his neck and chest. 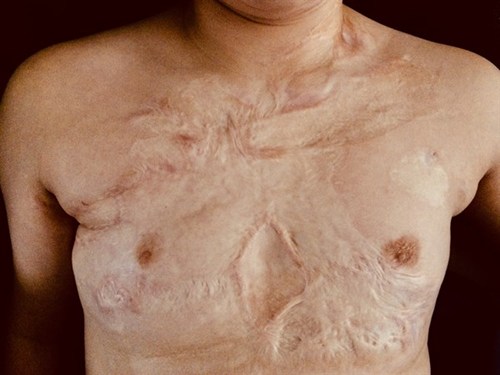 Amy said: “I know what it’s like being on the other side and what to look for …

“But as a parent it was killing me inside seeing him like that.  I had to try and keep calm for the family – and for Ben.

“He was in hospital for 21 days and still needs skin grafts and massages four times a day to keep the skin’s elasticity and that can be really hard going.

Ben is now comfortable with his physical scars – but the emotional scars still run deep.

In a heart-breaking admission, the inspirational youngster said: “Last bonfire night I managed to make it to the door to look outside but I’m still very scared of them.

“I usually sit in my room and pretend it’s just another day.”

And Ben, now aged 11, reached out to others to stay safe around fireworks.

He said: “I want people to think about the consequences of setting off these fireworks and how easy it is for something to go wrong - when you don’t know what to do.”

Amy, now a dental technician, tells how she draws strength from her son.

The proud mum said: “I was worried about what people would say when they saw his scars and how he would react.

“There was an incident at the swimming pool when he had his pressure garment on and some boys were staring at him and shouting stuff to him.

“I was looking around for their parents and at the same time worrying what this would do to Ben.

“He came over to me and said ‘Mum can you take the garment off’ – so I did.

“He put his chin up and walked past these boys bearing his scars with this presence that made my heart skip a beat of proudness – he is so much braver than me.” 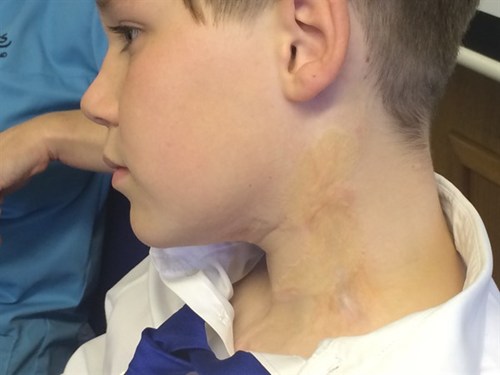 Amy got in touch with dedicated support group, The Scottish Burned Children’s Club, and the assistance she has been given has been life changing for the whole family.

She said: “Ben is so much more confident and determined and wants to help others.  He has an amazing network of friends through the club and I can’t describe how much it has helped him.

“For myself it has been a God-send to meet other families with similar stories – to know you are not on your own and that you are actually doing ok.

“It’s like a new family and a forever connection that no one else can understand.

“You can’t buy the support.”

“We are appealing to the public to attend organised events rather than do-it-yourself bonfires and fireworks displays.

“Our firefighters work extremely hard to engage with people of all ages and equip them with the knowledge and the awareness of how to stay safe around bonfires and fireworks.”

For advice on how to stay safe during Bonfire Night, visit our Bonfire Safety page and and our Fireworks Safety page.