Gordonstoun - the Scottish school with its own fire station

IT’S been dubbed the nation’s royal fire station – and boasts the Queen’s grandson Peter Phillips as a former captain.

Within the school’s grand campus sits a community fire station, crewed entirely by trained staff and a multitude of international students.

Throughout this week, we will be exploring the past, present and future of the unique Gordonstoun fire unit, in the first of our new ‘SFRS Spotlight’ series…

BACK ON THE FRONTLINE 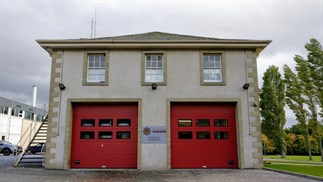 Earlier this year, Clarke and his team were mobilised as part of the Scottish Fire and Rescue Service response to a huge gorse fire at Hopeman beach in Moray – one of the most memorable calls of his 16-year tenure.

“Gordonstoun’s ethos is about fulfilling academic potential, but also about learning through experience and ultimately giving something back to the community,” Clarke, 52, explains.

The station, which is made up of three watches, returned to the frontline recently following the school’s summer break. Each watch is on call 24 hours a day for seven days, every three weeks.

The fire unit is one of nine school ‘services’, also including the coastguard – of which the Duke of Edinburgh and Prince of Wales were members – first aid and community service.

Clarke adds: “Leading this crew of young firefighters is hugely rewarding, and something I take great pride in. It’s one of the highlights of my job.

“To see how hard they work in training, and the time and effort they give to ensure we always have our appliance available, is very fulfilling.”

“This weekend is a rare weekend where everyone gets a break to go home,” says year-13 pupil Cameron, the fire unit’s newly elected captain.

The 17-year-old, however, won’t be returning home to see his family and friends back in Hampshire.

“I’m on call, so our watch will be some of the few students left on campus, to ensure our fire engine is ready and available if called,” Cameron explains.

“It’s a shame not to get the chance to go home, I suppose, but I really don’t mind – this is what we signed up for, and this is our responsibility.”

We'll publish the next installment of the spotlight series tomorrow...