Article originally published in the Dundee Courier on October 25 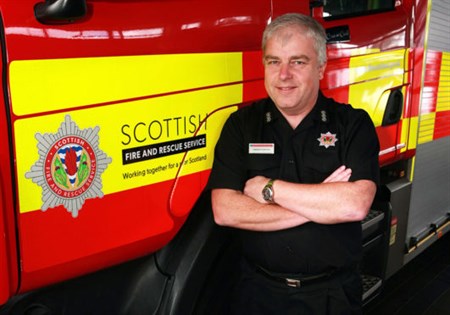 In his three decades in the fire service, firefighter Craig Thomson has seen first-hand the devastation a house fire can cause. Now he is working to prevent blazes and protect those who are most at risk from dying in their own home, especially those over 60.

Like all of his colleagues in the Scottish Fire and Rescue Service, Craig, 50, will never forget his first ever emergency call out with his watch. It happened when he was stationed in his hometown of Dundee, during his first nightshift in 1990. With just days’ experience in the fire service (then Tayside Fire & Rescue), Craig nervously awaited the alarm being raised and it came during the Italia ’90 World Cup tournament, he recalls.

“I remember it because it was a Sunday night and the World Cup was on. We were mobilised to a ground floor flat fire, with an elderly gentleman inside. He had been cooking when the fire started in the kitchen, and he suffered burns to his hands. Fortunately, he wasn’t badly hurt and was given first aid at the scene, but I remember it vividly.

“It was memorable because it was my very first house fire.”

But that initial callout was nothing compared to what was to come. In his career, the former electrician has been ‘turned out’ at numerous blazes at homes across Tayside in his 28-year career – many of the victims over the age of 60. Craig’s most memorable call-out is one that still sticks with him to this day.

He said: “I have seen the devastation a dwelling fire causes. This one in particular sticks out in my mind, not because it was a major fire, and there were no fatalities, but nevertheless, I remember it. It was a small living room fire in a property with a young couple who had been re-homed. They didn’t have much, and there was not much furniture…..every time I think about it, I get goosebumps.

“Going back into a property that has been devastated by fire is something I do not enjoy doing. When I took the girl back into her home, she walked over to a mirror on the wall, and took a photograph off. It was burnt at the edges and covered in smoke, so she wiped it off. I understood that it was a picture of her child that had been taken into care.

“She never had a lot and lost everything, but the most important thing to her was this photo – perhaps the only one she had of her child?

“I remember that incident more than the injuries and fatalities, because it made me realise that the personal belongings people can lose in a fire can be devastating too.”

This blaze, like the majority of house fires, could have been prevented and this hit home with father-of-two Craig – dad to Steven, 26, and 22-year-old Andrew – prompting him to specialise in “prevention and protection”.

Today, the group manager works in Service Delivery, Prevention and Protection across Perth, Kinross, Angus and Dundee, a full-time role that goes hand in hand with his 24-hour on-call shifts. It means he still attends serious incidents, as well as assessing how house fires can be prevented from happening again.

He added: “I remember we used to attend a dwelling fire every set of shifts. There are less now because of the focus on fire prevention, people have more fire safety knowledge and thanks to the introduction of smoke alarms the effects of fires are often reduced.

“Smoke detectors make a massive difference because they alert the occupant giving vital lifesaving minutes to escape and call the fire and rescue service. It is a key lifesaver. Investment in building standards has also made a vast difference, and how we educate people is also different.

During a home fire safety visit, firefighters carry out an assessment of your home, advise what to do in an emergency, how to plan a safe route, and rehearse it. Visits like these aim to drive down tragedies caused by house fires in Scotland.

Although the number is falling, and less people are being injured or losing their lives, people aged 60 or over are more likely to die in house fires. Since 2013, 61% of all house fire fatalities were in this age category. Plus, more than half of the 31 people who died in accidental house fires in Scotland in 2016-17 were over 60. The majority of these fires started in the kitchen and many of the lives lost could have been saved by installing smoke alarms.

Craig said: “There are many reasons why older people are at greater risk of a house fire: they may spend more time at home or live alone and they are more likely to be affected by mobility or long-term medical conditions.

“Limited sight or hearing can mean an individual is less likely to be aware of fire when it breaks out.

“Any of these factors could make someone more likely to experience a fire in their home.

“Most house fires are avoidable so when we attend a house fire and discover there hasn’t been a smoke alarm fitted, we feel great disappointment. We wonder why the property didn’t have a smoke alarm fitted – there could be a number of reasons, but changing a battery or replacing a faulty detector is all relatively cheap, and might have stopped that fire. Our advice is always to test smoke detectors, and if you do not have one fitted, we will fit a potentially lifesaving smoke detector free of charge.

“We want to help keep older people safe by visiting them now before they are affected by fire.  If you’re concerned about a family member who is over 60, a friend or a neighbour then a home fire safety visit could help keep them safe.”

Coming from a disciplined upbringing, and as the son of an RAF airman, it was natural Craig wanted to pursue a career in the uniformed services, and the fire service appealed to him “because the job entailed working in a team, helping others and providing a community service – and it is even more so to this day,” he said.

Now nearing his 30 years’ service in 2020, with an option of retirement approaching, Craig is looking to the future, but whatever he does, he plans to continue the fire prevention message.

THE ELDERLY AT RISK

Older people are significantly more at risk from fire and need to take steps to protect themselves.

If you are concerned about fire safety within your own home or that of an elderly loved one or neighbour, you can arrange for the Scottish Fire and Rescue Service to carry out a free Home Fire Safety Visit, following which they can also fit smoke alarms free of charge if required.

To arrange you can:

Over the last 5 years:

*  Article originally published in the Dundee Courier on October 25: https://www.thecourier.co.uk/fp/news/scotland/751143/saving-lives-in-courier-country-articleisfree/