As local buildings go, it’s definitely iconic. Having been the main base for Kirkcaldy’s firefighters for 80 years, it has seen countless changes in the service it houses. 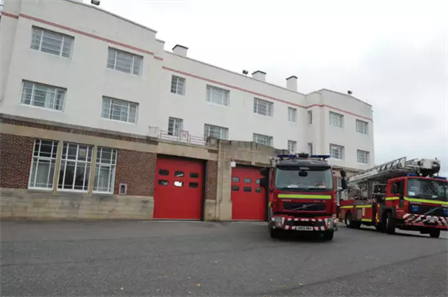 As local buildings go, it’s definitely iconic. Having been the main base for Kirkcaldy’s firefighters for 80 years, it has seen countless changes in the service it houses.

Indeed, the firefighters of 1938 would barely recognise the modern service provided by Kirkcaldy Fire Station today, but to the public and passers-by throughout the years, you’d be hard-pressed to see any changes in the outward appearance of the building.

Built in the art-deco style, it’s Grade B Listed, and instantly recognisable to many across Fife, and countless lives have been saved by the efforts of those who have worked and, in some cases, lived at Kirkcaldy Fire Station.

To mark its 80th year in operation, The Press was given a tour to see how both the building and the service have changed over the years.

At the top floor, station manager Stephen Thomson explains that this is referred to as the Top Flat – a reference to the early days of the building where the local fire chief would be housed on the top floor with his family. The floor below (the Middle Flat) was home to his deputies – but both floors were converted to office space, dormitories, recreational rooms and training areas in 1960.

The dorms and offices in there are relatively quiet – most of the firefighters are running drills out in the rear car park.

As we tour the Middle Flat, we step into an office with some prevention and protection officers.

Dave MacKinnon has a ukulele at his desk which he plays during his lunch break – it doesn’t take much goading by his colleagues to get him to play us a few chords. He explains that it often comes in handy: “Yesterday we had some kids in from the school, so I played them a song.”

Stephen adds: “With younger kids you need their attention, so Dave was able to deliver a fire safety message after giving them a song. It gives them something they can take home because they’ll always remember that part.”

Down on the ground floor, there’s a brief stop by to see a feature most people would traditionally associate with fire stations.

Sadly, for those who grew up wanting to slide down the pole, it has largely become a thing of the past in most stations due to health and safety.

But although the hole in the ceiling has been sealed off, the poles themselves are still in existence – a small nod to the heritage of the site.

Making our way through to where the fire engines are housed, they sit in readiness, doors open, with several small piles of clothing nearby.

Closer inspection reveals that they are in fact the full protective gear lying in wait, meaning firefighters would just step into their boots and pull their clothes up on the way to the appliance. Not a second is wasted here; time is precious when there could be lives at stake.

Stephen says that while the building may look the same on the outside as it did in 1938, what happens inside has altered drastically – even just in the last 30 years.

He explained: “There was a booklet produced for the 50th anniversary in 1988, if you were to ask any of the guys from around that time to come back in now they wouldn’t recognise the work routines and things that we do in terms of prevention.

“In 1988 we did do fire prevention, but certainly not to the extent now.

“In terms of what we do now, going to fires is maybe 10 per cent, and 90 per cent is prevention.”

And it’s a change that seems to be working.

“Thirty years ago it was accepted that maybe 10 or 11 people would die in Fife as a result of fires,” Stephen continued.

“Compare that with today where we’re at such low levels that even one is a disaster for us now.

“It shows a sea change in a relatively short period.”

Roddie Keith, the Local Senior Officer for Stirling, Clackmananshire, and Fife agreed: “We strive for zero fire deaths. It’s very hard to achieve,but the reduction that Stephen has indicated is huge. The fire service can rightly take credit for a lot of changes in things like building legislation and furnishings that have helped.

“Our prevention work has gone a log way to help realise those reductions.”

And it’s not just the numbers that have changed.

“In terms of staff we now have quite a lot of female members in Fife,” Stephen added.

The old building has also seen a few recent updates to the way the service is delivered.

A new initiative which was successfully tried and tested in Kirkcaldy has recently been rolled out across Scotland.

A measured response can now be taken to certain alarms, thanks to UFAS (Unwanted Fire Alarm Signal) Champions.

Roddie explained: “A relatively high percentage of all our turnouts are still to false alarms.

“We introduced our UFAS Champion in Kirkcaldy some time ago, who works very closely with business premises that have a relatively high number of fire alarms.

“For example, the Victoria Hospital is a very large complex building so, not surprisingly, had a high number of false alarms.

“Our UFAS Champion has been working with the NHS over the last year or so, and it has invested in the alarm system. Previously when there was an alarm to Victoria Hospital, we had to assume that it would be at a ward with a lot of vulnerable people where, in fact, it might have been the bin store round the back which is a seperate building.

“We now have an intelligent response which reduces the number of appliances that we need to send, depending on where the alarm originates.

“Overall with this sophisticated approach it’s reduced the number of false alarms dramatically.

“The concept originated here in Kirkcaldy, and it’s been adopted Scotland-wide.”

So despite being 80 years old, the Kirkcaldy station is still at the cutting edge of developing a more modern service.

And while the building may look the same as it did in 1938, we can rest assured that the men and women working inside will continue to find new and innovative ways to prevent fires and save lives.