Peterhead's Red Watch will walk 75 miles and have raised more than £5000 for charity. 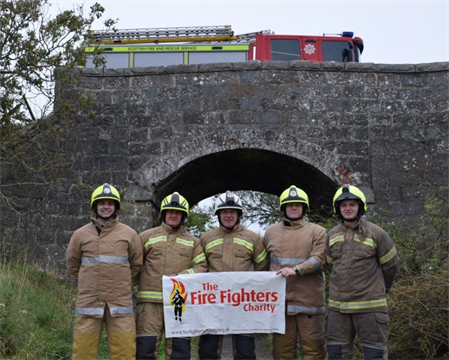 A group of big-hearted firefighters are to take on a mammoth charity challenge – in full firefighting kit.

Members of Peterhead’s Red Watch will trek 75 miles in aid of the Fire Fighters Charity.

The dedicated group plan to walk from Peterhead to Dyce and back over a gruelling 34 hour stint.

Their efforts have so far raised more than £5000 for charity.

He revealed: “I don’t think any of us have done anything like this before.

“But we’ve been training hard and trying to build up stamina by doing some distance walking.

“We know it won’t be easy, and there is some anxiety, but we wanted a challenge.

“It’s a massive effort to undertake, but we’re up for it.”

The support of their local community has left Red Watch feeling inspired and relishing the prospect of beginning their quest.

Watch Manager Sturrock explained: “The whole community has been fantastic. They have helped us reach and beat our target - which is amazing.

“Their support makes everything all the more worthwhile.

“The community is one hundred percent behind us.”

The Fire Fighters Charity exists to support firefighters and their families.

The prospect of being able to assist a charity close to their hearts is driving Red Watch to train hard for their challenge.

“The Fire Fighters Charity is a fantastic cause and is funded by donations,” explained Watch Manager Sturrock.

“They’re always there for firefighters and their families and if we can give something back to them then that is fantastic.”

To donate to Red Watch’s charity walk and to find out more visit www.justgiving.com/fundraising/red-watch-75miles