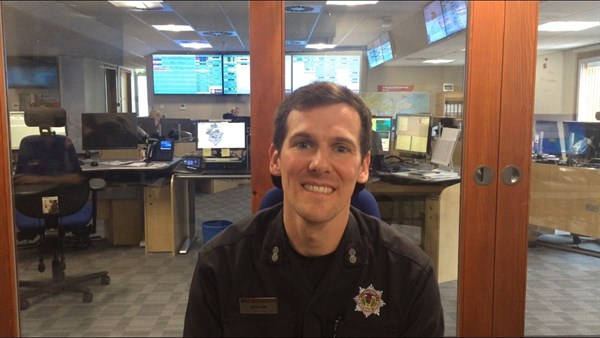 Experienced firefighters who stand on Scotland’s unseen front line have told how they can suffer verbal abuse on their busiest night of the year.

Watch Manager Adam Orr and his Operations Control colleagues worked hard to mobilise resources across the country as they were bombarded with more than 800 calls for assistance last Bonfire Night.

But they had to endure angry calls – and also listen as their firefighter colleagues on the ground were subjected to the threat of attack from groups of youths.

He spoke out as the Scottish Fire and Rescue Service launches its hard-hitting #DoNotAttackMe campaign – condemning the abuse of firefighters working hard to protect communities.

He said: “It doesn’t matter how experienced you are - frustrated and angry callers can be challenging, and especially on our busiest night of the year.

“It’s just a lack of understanding as they don’t realise our job is more than just answering the phone. We have fire engines moving about trying to put out bonfires and we have to make sure that each area is covered - in case of a real emergency.”

Watch Manager Orr, who serves on the blue watch, was on duty that night covering the East area of Scotland from the control room at Tollcross fire station.

And he also had to listen as firefighters on the front line feared physical abuse over the course of November 5.

He revealed: “It is very hard knowing the crews out there are under attack.  All we can do is contact the Police and pull the crew out of the area.

“We get intelligence from the Officers in the Incident Support Room through the Police so we know where the danger areas are and to not send in the crews.

“We also have CCTV in the control room which helps us get a visual of what is happening out there - and give us the full picture.

“We hope the public understand how frightening it is for our crews and our Operations Control staff listening in to all of this.”

Between 5pm and 10pm that night, firefighters had responded to approximately 330 bonfires.

But Operations Control are highly trained firefighters who answer calls for help and mobilise the appropriate resources – and it is vital they remain calm and vigilant to ensure communities protected.

Watch Manager Orr added: “Everyone knows what they need to do.  You know it’s going to be busy and the adrenaline is pumping – but we are calm.

“We work closely with the Officers in the Incident Support Room and with our Community Action Teams on the ground.

“And we are prepared for the hundreds of calls we are going to receive.”

He added: “The vast majority of the people of Scotland are so supportive of our emergency services and we thank them for that.

“But we want to reach out to that very small minority to outline that we are people too and we can get hurt.  We only want to help… so why attack us?”

To report abuse against emergency service personnel contact Police Scotland on 101 or alternatively through the anonymous Crimestoppers helpline on 0800 555 111.

For advice on how to stay safe during Bonfire Night, visit our Bonfire Safety page and and our Fireworks Safety page.