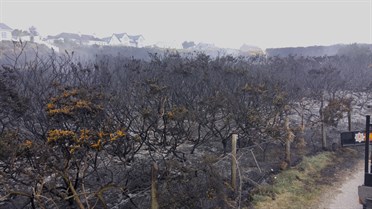 The Scottish Fire and Rescue Service was alerted at 8.04pm on Tuesday, May 8 to reports that the fire had taken hold out in the open at Hopeman Beach.

Operations Control mobilised a number of resources to the scene, where it was established that the large fire had developed within an area of gorse.

A number of nearby homes were evacuated as a precautionary measure, and there were no casualties.

Firefighters worked through the night alongside partners to contain and extinguish the flames, and left the scene at 3.30am after ensuring the area was made safe.

He said: “Scottish Fire and Rescue Service crews responded quickly and effectively to this incident.

“This was undoubtedly a large and challenging fire, and one that developed rapidly as a result of high winds and the volume of dry gorse.

“But decisive action ensured that the fire was extinguished and the scene secured, while preventing potential damage to nearby homes and beach huts.

“I would like to highlight the swift and professional response of firefighters who worked effectively with our partners in bringing this incident to a safe conclusion, and also extend a thanks to the community for their support.”

Crews have since returned to the scene this morning to ensure the area remains safe and extend reassurance.

He tweeted: “A big gorse fire in Hopeman today. Thanks to the @fire_scot emergency services for all their hard work to get things under control.”

For further advice and information about wildfires and how to prevent them visit: www.firescotland.gov.uk or www.outdooraccess-scotland.com/