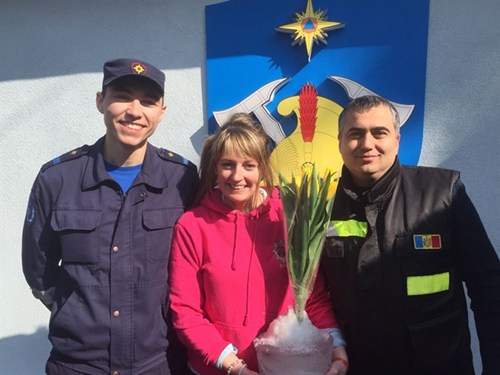 A Moray firefighter has made history by taking part in a mammoth charity quest.

By helping deliver two fire engines packed full of crucial equipment to her Moldovan colleagues, Nicolle, 33, became the first female in history to drive a fire engine in the Eastern European country.

The emergency service worker, who serves as both a wholetime and retained firefighter, was helping to deliver equipment on behalf of UK charity Operation Florian.

Nicolle, who spoke as the Scottish Fire and Rescue Service celebrates 100 years since women gained the vote, said: “When I was over there I was interviewed by a journalist because I was the first female to drive a fire engine in Moldova.

“When I was driving through the streets I definitely got some double-takes from people!

“I’d never driven on the other side of the road before – and I was now doing it in a fire engine-so I was a bit nervous.

“But it was an unbelievable experience and so humbling.”

The charity was set up by British firefighters in 1995 with the aim of sharing firefighting knowledge and expertise with crews across the world.

Nicolle’s efforts saw her and seven others travel from England into Germany, through Austria and Hungary, before entering Moldova.

Once safely arrived in Moldova, a delighted Nicolle and her fellow volunteers proudly presented two fire engines and a plethora of life-saving equipment to a delighted Moldovan fire crew.

“The Moldovan crew were delighted and were so friendly and welcoming.

“I didn’t know the British volunteers I travelled with when we first set-off, but now they are friends for life.

“I would recommend this to anyone, it’s such a great feeling being able to help. It’s a really great opportunity.

“The charity are always looking for volunteers and for people to get involved in fundraising – they do amazing work.”

David Farries is the Scottish Fire and Rescue Service’s Deputy Assistant Chief Officer for the North of Scotland.

He said: “Charities like Operation Florian carry out essential work and Nicolle should be very proud of the role she has played in helping others.

“The Scottish Fire and Rescue Service is the fourth largest fire service in the world and firefighters like Nicolle prove we are committed to sharing our skills, experience and expertise with everyone.”

For more on Operation Florian and on how to raise funds for the charity visit twitter.com/opoflorian?lang=en