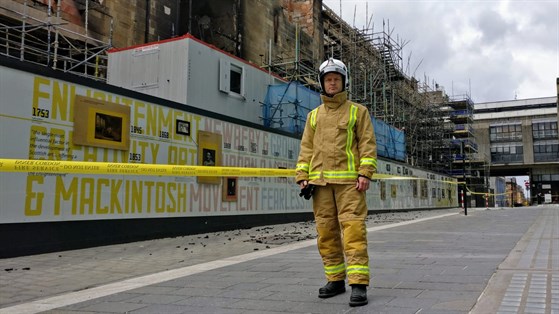 Deputy Chief Officer Iain Bushell today escorted Community Safety Minister Annabelle Ewing to the scene of the devastating fire that took hold within The Glasgow School of Art, O2 ABC and adjoining buildings at the weekend.

At its height, more than 120 firefighters and 20 fire engines were mobilised to the city centre after the alarm was raised at 11.19pm on Friday, June 15.

The fire has largely been extinguished however firefighters continue to work to extinguish a small number of heat pockets, and two fire engines and an aerial appliance remain at the scene on Tuesday, June 19.

As the Scottish Fire and Rescue Service enters the final stages of firefighting, DCO Bushell showed the Community Safety Minister first-hand the extent of the damage, before introducing Ms Ewing to some of the first crews mobilised to the scene. 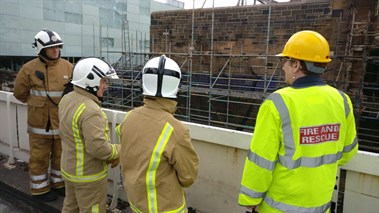 DCO Bushell, the senior officer in charge on Friday night, said: "We are now in the fourth full day of fire service operations, with a small number of firefighters still on scene - and still working extremely hard to bring this challenging incident to a safe conclusion.

"I was therefore pleased to be able to introduce the Minister to those firefighters – they represent every single last one of their colleagues who pulled together to bring this fire under control and protect the community.

“I would like to pay tribute to their outstanding professionalism, as well as our Operations Control firefighters and Incident Support Room colleagues who co-ordinated a massive amount of resources to the scene, as well as our many partners including Police Scotland and the Scottish Ambulance Service.

"We are also fully aware of the great significance that buildings such as the magnificent Glasgow School of Art holds for the people of Glasgow and the affection for the O2 ABC, along with the impact on smaller local businesses who have also been affected. 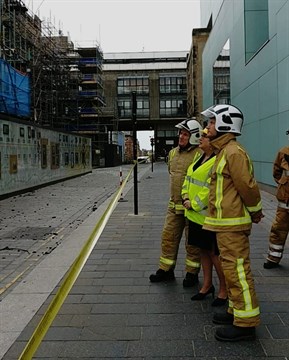 “This has been at the forefront of all of our minds throughout what has been a challenging and protracted incident.”

Ms Ewing said: “I can't express highly enough our thanks to firefighters on behalf of the Scottish Government – their bravery and professionalism knows no bounds.

"I was able to hear directly from the senior officers on site today about how the firefighters worked so quickly and professionally to ensure there were no casualties and to limit damage to other nearby buildings.

“Once again I offer my heartfelt thanks to firefighters for their efforts in tackling this terrible fire, and for everything they do to keep the people of Scotland safe.”

ACO McGown, who is the SFRS Director of Prevention and Protection, said: "The investigation into this devastating incident has already commenced.

“Our fire investigation team has started gathering information and, working alongside our police partners, will look at various sources of information to establish exactly what has happened here.

“However, I would like to stress that this is a very complex process and will take time.

“It is of vital importance that we ensure the full facts and circumstances of this incident are clearly established.”