Danish royalty reaches out to SFRS knowledge and expertise

SFRS was thrilled to share its expert knowledge with Her Royal Highness Princess Marie of Denmark, 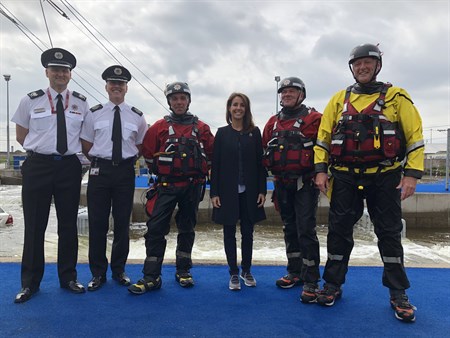 Danish royalty touched down in Scotland recently to learn how the Scottish Fire and Rescue Service is keeping the country’s communities safe.

SFRS – the world’s fourth largest fire and rescue service – was thrilled to share its expert knowledge with Her Royal Highness Princess Marie of Denmark, who is currently working in a key role with the Danish Emergency Management Agency (DEMA).

DEMA, an official Danish government agency, oversees the running of the Danish National Fire and Rescue Service and exists to protect the Nordic country during times of emergency.

Princess Marie was joined by senior DEMA officers in Scotland to learn more about the wide range of life-saving skills that SFRS calls on every day, with a particular focus on fire prevention and resilience in responding to emerging risks such as severe weather flooding.

He said: “It was a fantastic honour to welcome Her Royal Highness Princess Marie and officers from the Danish Emergency Management Agency to Scotland.

“I would like to take this opportunity to thank them for reaching out to the Scottish Fire and Rescue Service to establish this unique and important partnership.

“Denmark and Scotland have certain similarities, in terms of demographics, geography and emerging risks, and we were delighted to receive such positive feedback.

“Our Danish colleagues spoke of how impressed and inspired they were by the successful and systematic partnership working that underpins everything we do.

“SFRS is already widely viewed as a fire and rescue world leader, and we are always looking to establish new and unique partnerships to help more communities stay safe, and to help in any way we can.” 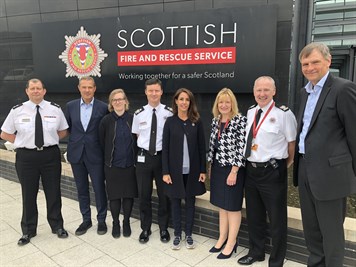 During the two-day visit, Assistant Chief Officer David McGown welcomed Princess and the DEMA officers to the Service’s HQ at Cambuslang to learn about the delivery, development and critical importance of the SFRS’s free home fire safety visits (HFSV).

The HFSV initiative – which is available to every single household in Scotland – has been absolutely vital in reducing the number of accidental house fires in Scotland in recent years.

This was followed by a tour of the Service’s Safe and Well House, where firefighters support the elderly population by helping them learn how to look out for signs of danger that could lead to slips and trips, while also identifying the needs of those living with dementia.

This came in the same week that the SFRS launched its 20th nationwide water rescue unit in Aberdeen, and unveiled a £1.3 million investment into new kit for all firefighters in Scotland to tackle severe weather response.

The visit involved a live demonstration by a Swift Water Rescue Team, followed by a discussion on the Service’s Community Asset Register – a database which allows the Service to call upon nationwide equipment and specialist knowledge during times of emergency.

Finally, Princess Marie and her DEMA colleagues enjoyed a lunch with SFRS Board Member Primrose Stark, Deputy Chief Officer Bushell – who joined SFRS in 2017 from Strathcona County Emergency Services in Alberta, Canada – and members of the Service’s Strategic Leadership Team.

SFRS Board Member Primrose Stark said: “This visit from Her Royal Highness Princess Marie and our Danish colleagues was not only hugely worthwhile, but it was also an introduction to how the Scottish Fire and Rescue Service can help improve the wellbeing and safety of communities across the world.

“It was fantastic to be able to promote the life-saving work and unwavering commitment of each and every individual within the SFRS family.”