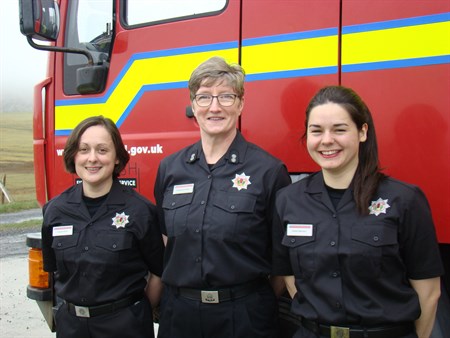 A FRENCH biologist moved to Scotland’s most remote island to watch killer whales – and became a retained firefighter.

Cloe Faita originally planned to stay on the Fair Isle for five months watching the marine life, including Orcas, in the North Sea.

But after just weeks of living on the mile-wide island, the 22-year-old decided to make the move permanent.

And despite being 100 miles off the coast of mainland Scotland and almost 1,000 miles from France, Cloe found she was not the only French woman living on the one-mile wide outpost halfway between Orkney and Shetland.

Marie Bruhat, 26, had also moved to the island which is famed for its knitwear, to pursue her own career in textiles.

And together they decided to join Scotland’s most remote retained firefighter crew after falling in love with the community.

Cloe said: “I moved here just over a year ago for five months – I started working at the bird sanctuary which was great for watching the marine life – I never left.

“I fell in love with the island and the people that live here – it is such a small community with only 50-60 people, but because of this everyone has a purpose.

“It’s like a jigsaw, everyone knows everyone else and you try to help each other everywhere– it works.”

The former biology teacher, who grew up in Geneva, has even taken on three other jobs within the tiny island community, including working temporarily as an ecological consultant for a landmark project to deliver 24-hour power to the island for the first time.

She added: “I mainly knit and finish traditional Fair Isle knitwear – which I learned how to do here on the island - and volunteer at the island’s museum. 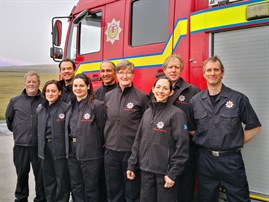 “Everyone has different jobs but we all chip in when the boat arrives, and needs unloaded or there’s a big job that needs done – I think it’s great here.”

The island currently only receives power during daylight hours and can be cut off from the mainland by poor weather for weeks at a time.

Heavily reliant on deliveries by plane and boat, the community will turn to each-other for assistance – never more so than in the event of an emergency.

Inspired by their new island family and an appeal for more retained firefighters, both Cloe and Marie decided to step up to protect the island’s inhabitants from harm.

Cloe continued: “I knew they needed firefighters – many of the people we knew were already part of it.

“I was available, young and fit – Marie was interested too and was thinking the same thing.

“I never thought about becoming a firefighter before, growing up in France, but I did know I couldn’t stand by and watch thinking ‘oh-gosh I wish I could help’ If something did happen.”

Both graduated in May from the latest retained recruits course in Lerwick, Shetlands, where Cloe learned the life-saving skills needed to protect her community from harm.

She added: “Now I have the skills to make a difference and it is so important here.

“If there is an emergency - we can respond and save the lives of people we will probably know.”

Out of the 50 people currently living on the island, nine of them are retained firefighters – and attracting new recruits can be difficult due to the small population.

But Cloe knows that this is a situation echoed in rural communities across Scotland, and has urged others to join their local retained crews no matter their background, or where they come from.

Cloe said: “Just go for it.

“I know there will be other people in sort of similar positions – if there’s no reason not to, then do it. 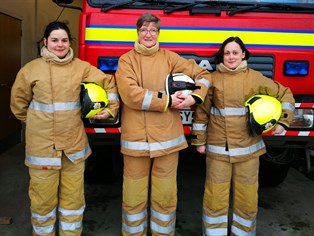 “What you will learn and working with people you know and trust is great – it’s nice to feel part of something bigger and give something back.”

Fiona, a veteran of 19 years’ service on the island, says that Cloe and Marie have delivered a major boost to the crew who have dedicated their spare time to protecting their community.

She said: “We are delighted that they could join us – they’ve shown such willingness and eagerness to learn.

“It’s so important to us as a crew because the people we responding to, even the partners that we are working with as other first responders, are all our neighbours, friends and family.

“It’s so tight-knit here, and it carries over into the retained service – we are here for this island when it needs us.”

He said: “Cloe, Marie, and their fellow retained crew members on Fair Isle are living proof that commitment, professionalism and teamwork can make a real difference

“Each have made a bold choice in stepping up to protect their community from harm, showing that heroes can come from any background and take many forms – a great source of pride for myself and SFRS.

“I would encourage others to follow the example set by the Fair Isle crew – broaden their horizons, learn new skills and serve at the heart of their community by becoming a retained firefighter.”

For more on what it takes to become a retained firefighter visit www.myjobscotland.gov.uk/emergency-services/scottish-fire-and-rescue-service/retained-firefighters