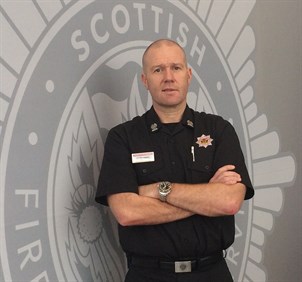 A fire chief has described the “harrowing” experience of attending a family home devastated by fire during Christmas.

David Farries is the Scottish Fire and Rescue Service’s Deputy Assistant Chief Officer, responsible for protecting communities across the North of Scotland.

But in his previous role as a specialist fire investigation officer, he worked behind the cordon searching for vital clues to explain how tragedy unfolded.

And the veteran, who has more than 20 years’ experience under his belt, is issuing a stark warning to everyone to stay safe this festive season.

He said: “We are professionals and we are specialists in our field but we are also human and we have families.

“When you go to a home that’s had a fire and there are Christmas presents lying out, then that is going to stay with you. That’s happened to me on numerous occasions.

“It’s harrowing when I think back to such incidents.

“The families had been preparing for the festive season and now didn’t know what they were going to do for Christmas. But more than that - they didn’t know how to get past this truly awful and frightening experience ... because it is frightening.”

He added: “There’s nothing worse than responding to a house fire with a Christmas tree lying out and kid’s presents under it – it pulls on the heartstrings when you see a family affected in that way.

“Christmas presents can always be replaced … but lives can’t – and, believe me, having dealt with the effects of devastating fires on far too many occasions, I know what I’m talking about.

DACO Farries’ experiences have driven his commitment to prevent fires from occurring in the first place.

The fire chief also attended several dwelling fires caused by Christmas decorations, a common cause of such incidents at this time of year.

And while he is keen for everyone to enjoy the festivities, DACO Farries is urging homeowners to prioritise safety and be aware of the hazards which can include flammable decorations, naked candles and alcohol consumption as well as distraction whilst cooking.

He said: “I spent a few years as a fire investigation officer and we saw regular evidence of excessive Christmas decorations, where people had created dangerous circumstances.

“They hadn’t done it intentionally – they did it because it looked nice and they wanted to feel Christmassy, but ultimately they ended up with a fire in their living room.

“I’ve seen examples of massive amounts of decorations overdrawing electrical supplies or sitting too close to naked flames such as candles.”

DACO Farries continued: “I remember one particular incident in Edinburgh, where it looked like the National Lampoon house, and all the decorations and lights had completely overdrawn the supply. That led to a fire in the electrical cupboard, in the fuse box.

“You need to measure your safety against the type of fun you want to have. There are plenty of products that are safe, but some of the traditional Christmas decorations are quite thin and can spread quite rapidly.

“People need to be conscious of that – and that is where we are most willing to step in and assist.”

A free home fire safety visit is one of the most effective ways to help ensure your home is safe; and instances of fire have reduced by more than 40 per cent in Scotland during the past decade.

The experienced officer said: “Through some fantastic prevention work by the Service, the number of accidental dwelling fires has dropped ... but that doesn’t make the severity of fire, or the outcome, any different.

“We need to make sure people don’t become complacent. All year round, people think fires won’t happen to them.

“We’ve embarked on this massive campaign with home fire safety visits and getting into people’s homes to help make them safer.

“But it’s when people drop their guard that things can happen – maybe after a night out, or when you are cooking after being out.

“If you are of the frame of mind where you feel that it’ll never happen to you, I’d reiterate that it absolutely can.

“You can be the most safety conscious person in the world, but accidents happen

“We need to bear that in mind and understand while numbers are lower, for the individuals affected, fire is as devastating as it ever was.”

To find out more about how to obtain a free home fire safety visit, click here www.firescotland.gov.uk/your-safety/hfsv-form.aspx