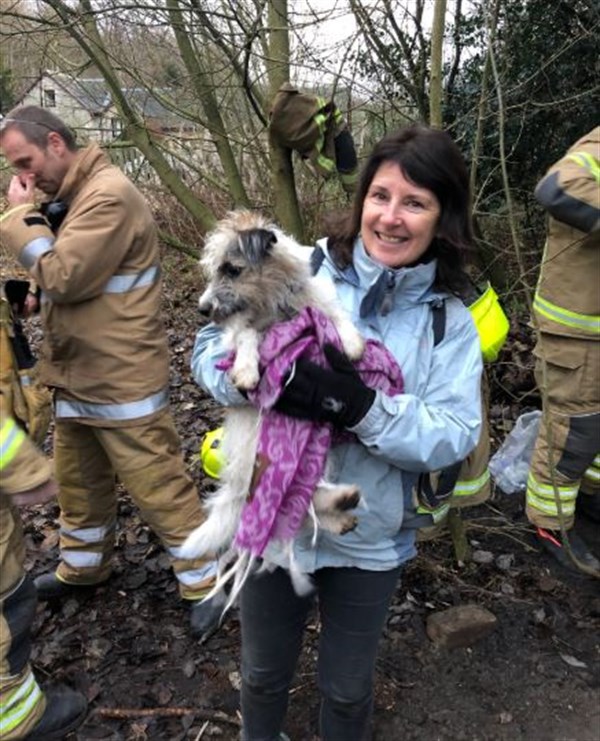 Firefighters rescued a little dog trapped down a foxes den by listening to her whimpers – and found the fox.

The Scottish Fire and Rescue Service was mobilised to help the distressed pet after the alarm was raised at 11.56am on Sunday, December 9.

And they used specialist equipment to detect the sound of the Jack Russell dog’s whimpers - after it had been stuck for several hours within a fox hole in old underground railway carriage.

The relieved one-year-old dog – named Ethel – was rescued and given cuddles from her delighted owner May and she has since fully recovered.

Group Manager Andy McDermott said: “The crew initially tried to find the dog by using spades to excavate round the fox hole without success – but they were determined not to give up on the little animal.

“Using listening devices and remote cameras, which are used in urban search and rescue situations where we try to locate people in collapsed buildings, they were able to pinpoint the approximate location of Ethel who was stuck – and also the fox!

“I think the fox was just as shocked as we were when we found it.

“It wasn’t looking good for Ethel for a while due to the darkness coming in but she managed another whimper that allowed us to find her.

“The crew continued to dig down and eventually were able to retrieve the dog who appeared ecstatic to be free.”

Her owner May Watson, who is a Watch Manager at the Edinburgh Control Room was watching over with worry as the crews got to work.

She said: “It was the first time we had taken her to that part of the hill and Ethel immediately got a scent of something and shot off.

“We heard her barking in the den for about an hour and expected her to retreat at some point but started to worry when we stopped hearing her - and this is when we called the Fire Service for help.

“We would never have been able to get her out without the firefighters help as she was trapped under the old railway carriage and couldn’t get out.

“She has now recovered from her ordeal after spending a day on the sofa.”

And this is not the first time that firefighters have rescued a dog underground using this type of equipment.

They supported Bear the chorkie dog in August when he became stuck down a series of rabbit holes in field in Linlithgow.

Using a series of sequences the crew were able to pinpoint the approximate location of Bear who was stuck down one of the rabbit warrens.

He was hydrated with water after his ordeal and after some cuddles from the crew and his owner he looked set to go chasing the rabbits again.