Firefighter warns of blaze danger in the home

But in spite of the harrowing images and senseless loss he has encountered over his career, the 50-year-old describes the job as, “the best in the world”.

That’s why he isn’t fully retiring from the Scottish Fire and Rescue Service (SFRS) but will remain as a retained firefighter, on call 100 hours a week with the Bathgate station where it all began for him.

He explained: “My father joined the fire service in Livingston when I was six months old so that station has been part of my life for 50 years. I never considered doing any other career, this was just something I knew I was going to do. It was part of my upbringing. I had to wait until I was 18 to apply, and I joined when I had just turned 19.”

At the start of his career, John was based in Crewe Toll in Edinburgh, before transferring to Livingston, West Lothian, in 1991. And within just days of beginning work as a firefighter, the major cause of accidental blazes became evident.

“Pretty much straight away it was obvious that smoking was a major cause of fires,” he said. “Back in the late 80s and 90s everybody who smoked did so in their house and more people smoked then than do now, so the majority of fires we went to back then were caused by cigarettes.

“Thankfully that number has reduced, but still 46 per cent of all accidental fire deaths happen through smoking so it remains a major problem.

“In those days, smoking was so common it was normalised, but I look back and can’t believe what went on. If you told people just how many house fires you went to through smoking back then they would struggle to believe you.” 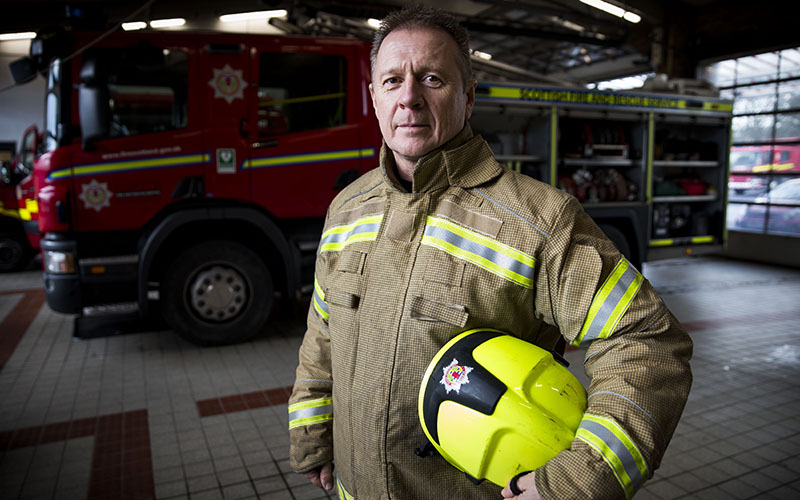 The needless destruction as a result of accidental fires is something John had to learn early on to come to terms with, vowing along with his colleagues to do everything they can to prevent unnecessary damage, injury and loss of life for as long as they serve.

John recalled: “I remember in the mid-90s an elderly gentleman was on oxygen therapy because of a medical condition and he still insisted on smoking even though his clothes would have been saturated with oxygen. He unfortunately set fire to himself. The fire was sudden and devastating. Incidents like this stick in your mind. Every accidental fire death I have seen is a tragedy that could have been avoided

“Today if someone was on oxygen therapy we would be able to advise them of the risks to avoid tragedies like that.”

Among the most hazardous past-times is smoking on soft-furnishings or in bed. And though the elderly are most at risk, John has seen people of all ages affected.

He said: “There was a young couple who had been smoking in bed with ashtrays both sides. They left the room to get a drink and one had left a cigarette in the ashtray. They came back and the whole bedroom was on fire because they’d left the window open and it had blown the cigarette onto the bed and it had ignited. They didn’t have any insurance and they lost their flat just because of one careless mistake. It was horrendous.”

Part of the work of a firefighter now is to assess risk and help individuals and families make changes.

“If you insist on smoking in the house, then have water in your ashtray to make sure the cigarette is fully extinguished, don’t flick ash or cigarette ends into bins, and never smoke in bed.

“But the best advice is, when you light up, get up and take it right outside. There are still far too many accidental fires caused by smoking. People think, ‘It won’t happen to me,’ but it can and does.

“We’ve talked a lot of people round, but we still have a way to go.

“If you’re smoking in the house and you add alcohol, drugs or medication into that mix it can be lethal because people fall asleep and the sofa can catch fire. It’s not worth the risk.” 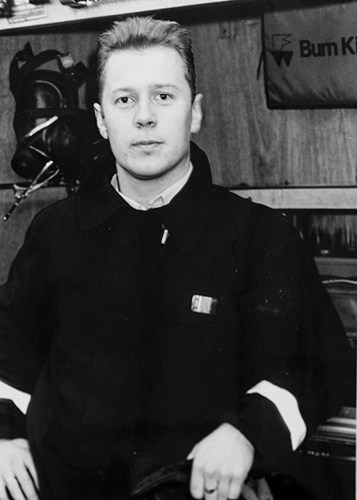 John when he first joined the fire service

John’s love of the job means he’ll continue his work as a retained firefighter, something he has been doing for the past two-and-a-half years in addition to his full-time job with the service.

“It’s the best job in the world in my eyes. I took a break from the frontline five years ago and did Community Fire Safety work for a year and a half. I enjoyed it but I missed the front line and I had to go back. But whatever your role is with SFRS, it’s about being involved, trying to help people and doing a bit of good out there.”

Although the dad of four recognises the dangers of the job, he’s prepared to go into burning buildings for as long as he’s allowed.

He said: “We know how dangerous it is, and my wife is terrified. Every time I leave the house she says, ‘Be safe for us’.

“But we’re so focussed on safety. You can’t rule out every scenario, but we make it as safe as it possibly can be. We follow procedures and we watch each others’ backs.

“If a situation arises you’ll do anything if there’s someone inside a building that’s on fire. You’ll go that extra mile. It’s the same for every firefighter.”

To register for a Home Fire Safety Visit:

What every smoker should know: