Read all about this two-year-old toddler's fire station obsession 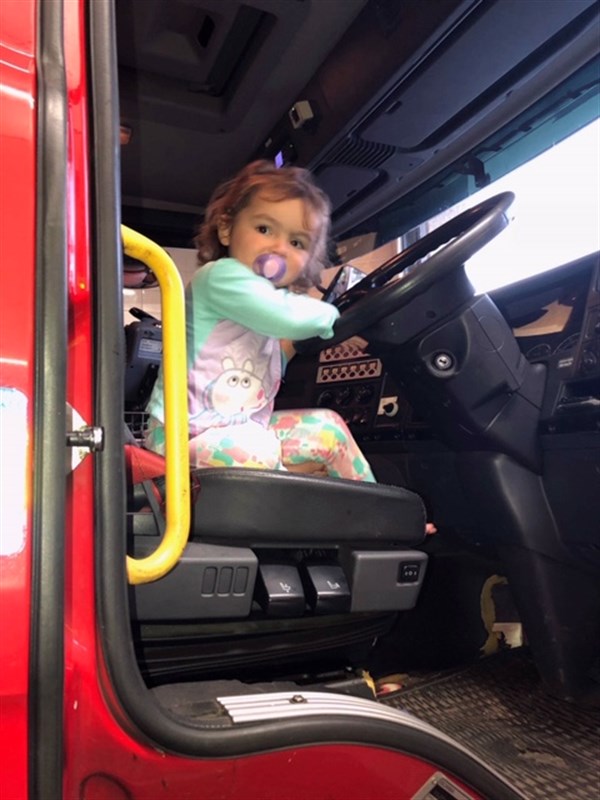 A two-year-old is driving her mum blazing mad by demanding late night turn outs to her local fire station – in her pyjamas.

Little Jessica’s obsession started about six months ago when she was star-struck by a blaring fire engine on its way to an emergency.

And her long suffering mum not only has to take her to the station shortly before bedtime ... but walk past the fire station at least three times on her way home – peeking through the appliance doors to wave to any firefighters who may be around.

Mum Leanne Hamilton, 27, said: “One day we were walking down the street when a fire engine with flashing blue lights and sirens passed and Jessica was like ‘what’s that?’.

“Now it’s ended up with me having to make regular visits to the fire station and that is not always during the day.

“I totally understand the value of telling her all about the work of our emergency services and the fantastic work they do for the community so I am happy to accommodate - and particularly if that means getting the wee one down for a good night’s rest after a quick visit.”

Leanne spoke as Jessica prepares to undertake a half a mile long charity walk on Saturday, December 1 to present the crews with charity funds for The Fire Fighters Charity – so far raising £239.

She said: “Jessica LOVES fire engines and she is a familiar face at her local fire station.

“Now she wants to give something back to them by raising money for The Fire Fighters Charity.

“We are doing a Big Toddle from Inverleith Park to Crewe Toll fire station – which is about half a mile.

“The crews have been so welcoming to Jessica that we wanted to give something in return and raising money for The Fire Fighters Charity will help them when they need to reach out for assistance.

“I really hope my daughters’ effort will make a difference - she has beaten her target of £150 – and I’m so very proud of her.”

Jessica is now recognised by the firefighters at Crewe Toll fire station thanks to her regular visits.

Leanne said: “The crews know the drill and they are very accommodating and she gets to sit in the fire engine and push buttons pretending to be in charge.

“She is planning to bake cakes for them all after she finishes her walk.

“I’m not sure where her love of fire engines came from as she is more into Peppa Pig than Fireman Sam.”

Local Senior Officer for Edinburgh City Kenny Rogers said: “Our doors are always open for any member of the public to visit us.

“We are delighted that Jessica loves to visit and it’s great to see young people wanting to learn about what firefighters do and all about fire safety.

“We might have a new firefighter of the future on our hands in years to come – in fact, by the sounds of it she might even try for my job!”

To sponsor Jessica for her toddle visit - https://www.gofundme.com/rdrxw-jessicas-big-toddle

For more information on The Fire Fighters Charity visit - https://www.firefighterscharity.org.uk/