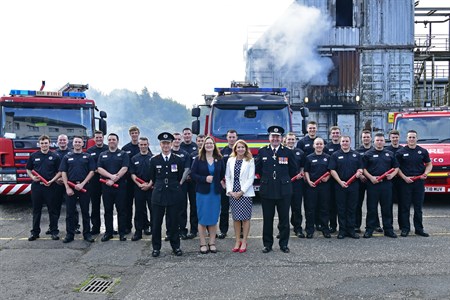 More than 20 new firefighters graduated earlier today – taking the total number of new recruits standing on the frontline across Scotland to more than 100.

The new trainee firefighters, who are based at Thornton in Fife, were formally welcomed to the Scottish Fire and Rescue Service following a challenging  14-week training schedule. At the formal graduation event attended by Community Safety Minister Ash Denham on Friday, August 3 the recruits were also given the opportunity to showcase their rescue skills in front of proud friends and family.

The 21 firefighters were the latest to graduate from the SFRS’ main three training centres.

Yesterday, 24 graduates based in Portlethen near Aberdeen formally received their scrolls followed by 58 at the National Training Centre at Cambuslang the previous week.

An overall total of 103 trainees based across Scotland will now stand on the frontline to protect Scotland’s communities from next week.

Alasdair Hay is the Scottish Fire and Rescue Service’s Chief Officer. He said: “These firefighters have proven themselves to be the best of the best - and it is an honour to welcome them to the UK’s largest fire service.

“Being a firefighter is an extremely rewarding job and in my opinion the best job in the world – I hope it will also be a long and successful career for them as it has been for me. “I wish all of the graduates the best for their future in the Scottish Fire and Rescue Service.

“They are a credit not only to themselves and their families but to their communities.”

Minister for Community Safety, Ash Denham, said: “I am delighted to be able to present these new firefighters with their graduation scrolls on what is my first official engagement with the Scottish Fire and Rescue Service.

“These graduates have gone through an extremely challenging period of training and I would like to commend every new Firefighter on their exceptional achievement.

“These new recruits are taking on a crucial role at the forefront of the modern fire and rescue service in Scotland and they will contribute to the safety of local communities across the whole country.”