Spotlight on Orkney: 'The most rewarding job in the world' 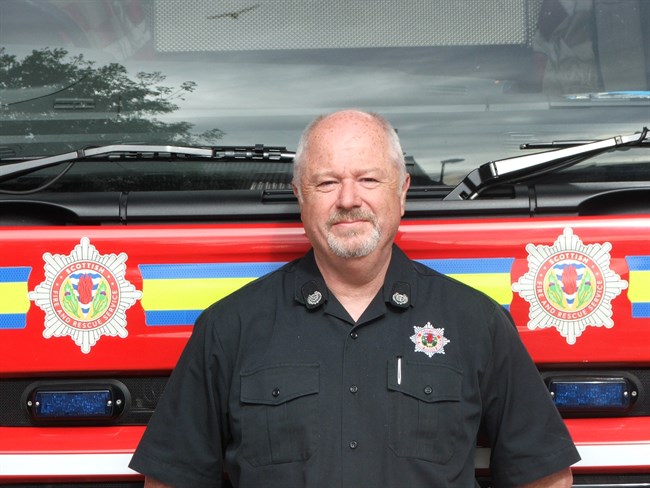 A VETERAN firefighter has told how working in one of Scotland’s most scenic islands is the most “rewarding job in the world”.

Scottish Fire and Rescue Service Group Manager Paul Edwards, 54, has stood on the front line for over 30 years and protected communities across Scotland.

But he has now made Orkney his home and is calling on local people from all walks of life to follow his lead and become retained duty firefighters.

Paul, who has settled on the major Scottish island with his wife Jackie and Collie Chloe, said: “I have always worked in rural areas in my time as a firefighter.

“In the late eighties I was actually working as a firefighter in the air force at RAF Leeming, however it wasn’t until I become a retained firefighter working in the more rural parts of North Yorkshire that I really began to think; this is something I would like to make a career out of.

“Eventually an opportunity for a station manager position opened up on Skye – we went and had a look and decided it would be a brilliant place to live and work, and so many of the skills which I had acquired working as a retained and full time firefighter in rural areas would come into play.”

Paul spent four years on Skye, before taking up the post of Group Manager in Orkney in 2015.

And while working in more remote communities do present unique challenges, they also have unique strengths; most notably a deep sense of community.

Paul continued: “Each individual is an essential part of the team – never more so than in rural communities.

However Paul recently took part in the first ever recruits course - held in Kirkwall – a major boost for the area.

Paul added: “All the areas that I have worked in have shared the same difficulties – recruitment being one of the main ones for many reasons.

“However we have listened to communities and we have been working incredibly hard to make applying and training to become a retained firefighter far easier and smoother.

“We have localised training on Orkney rather than the mainland, meaning people spend less time away from their jobs, their families and their communities.

“We can provide the equipment, the appliances, the training – but at the end of the day we need people to come forwards.

“This is great opportunity to learn new skills and really broaden horizons – not to mention become part of the Scottish Fire and Rescue Service family.”