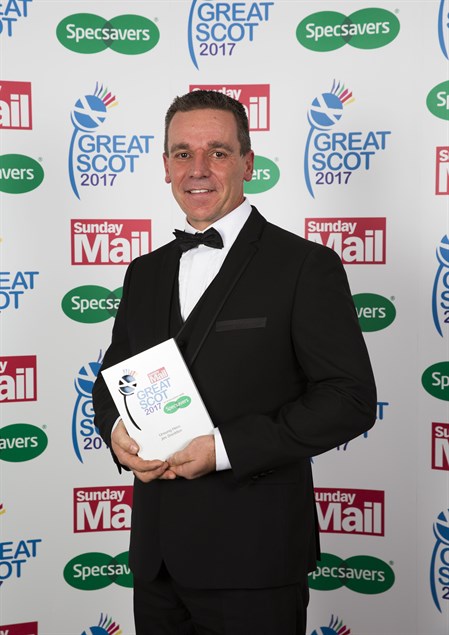 A VETERAN firefighter who helped rescue dozens of refugees from drowning in the Mediterranean has been honoured.

Jim, who is based at Dunblane Community Fire Station, received a standing ovation when he picked up the Great Scot 2017 award at Glasgow’s Doubletree by Hilton hotel.

He said: “I’m not one for the limelight – but I was so honoured to receive this award.

“I was in a room full of the most inspirational people in Scotland – all of them deserving recognition and I did not expect to win – I didn’t even expect to be nominated in the first place.

“But it was great night, for me and my family.

Jim was nominated in June this year, and spoke openly of the deep emotional impact that the scenes in the Mediterranean had on him.

He said: "When I was out there, I was too busy to think about anything except getting people to safety but, since returning to Scotland, I haven’t been able to get the refugees – especially the babies and little children – out of my head.

“The pictures on the news don’t do the horror of their plight justice. One day I boarded a small dinghy packed with at least 130 people.

"I noticed a hand reaching into the air from below the crush. I pulled out a 16-year-old girl, who threw her arms round my neck and refused to let go. I will never forget the look in her eyes.”

Jim is currently plays a key role in training firefighters in Water Rescue and these crucial skills were vital during his time in the Mediterranean.

Firefighters across Scotland stand ready to put themselves on the front line to preserve life, both domestically and internationally, and SFRS will always assist its international colleagues in times of crisis.

As a retained firefighter, Jim's commitment to keeping communities safe is unwavering.

He said: "As a retained firefighter, the safety of the public, the preservation of life and the service are important to me.

"Currently SFRS is recruiting in Stirling and Clackmannanshire, as well as across the country - many of the skills I am able to utilise in the Mediterranean can be learned by becoming a retained firefighter there is the chance to learn many more transferable skills."

Anyone who is interested in following in Jim's footsteps by becoming an RDS firefighter can find more information here: /work-with-us/retained-firefighters.aspx