Mani tells how he swapped serving customers for saving lives 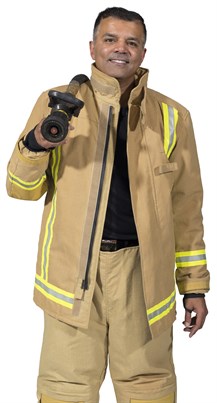 A former newsagent has told how he made a life-changing decision thanks to his customers – a crew of firefighters.

Mani Dhesi left the shop counter and joined the Scottish Fire and Rescue Service after being inspired by their accounts of protecting the public.

And the father-of-two – who can speak FOUR languages – is now playing a vital role in bringing the SFRS closer to communities.

He spoke about his inspiration as the Scottish Fire and Rescue Service prepares to launch a recruitment campaign on November 30.

The 47-year-old said: “My family used to own some stores around the Springburn area of Glasgow.

“I was working in the one directly across the road from Springburn Community Fire Station.

“I knew the guys in there well because every day I was seeing them, hearing their stories and watching them head out on shouts.

“Slowly, and with their encouragement, I began to realise that being a firefighter was what I wanted to do. As soon as the stores were sold or rented, I signed straight up.”

Mani, now a Watch Manager, added: “It was strange later on as I would see these guys after joining the service – and in some cases even be their gaffer.”

The keen rugby fan also revealed his pride in being a role model, working as a coach for local youth teams.

And the family man, who has two sons Arron and Zac to wife Asia, 42, is a practicing Sikh who can speaks fluent Punjabi, Hindi - and Urdu!

He said: “My family is originally from India, and my grandfather fought for the British Army.

“One of the main things I enjoy is being able to bring the SFRS community and the Sikh and Indian communities together. 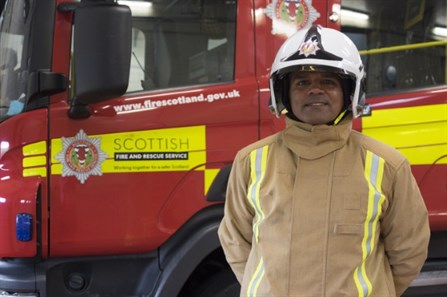 “When we do organise events, we are seeing more and more Sikh representation from all the emergency services and the British army as well as SFRS – it’s fantastic.

“Youngsters might not have known who to speak to or contact, or may not have had the confidence to come forward and speak to us.

“But we are going to them and I am very proud to be able to do this and be a positive role model in the community, break down language barriers and promote our safety messages too.”

Now Mani has called on others to follow in his footsteps.

He said: “The best thing I could say to someone is to come and speak to us – you see people open up after a quick chat and they begin to realise that becoming a firefighter really is something that they could accomplish.”

To find out how to apply, visit www.firescotland.gov.uk/peoplelikeyou