Trainees from Thornton raised £2,000 for charity after a gruelling 5km walk over the iconic Forth Road Bridge 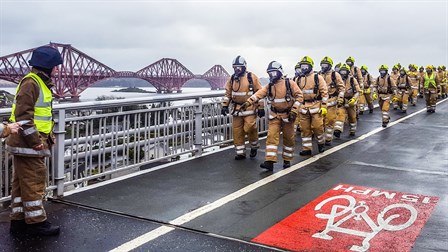 TRAINEE firefighters proved they can go the distance after crossing the Forth Road Bridge in full breathing apparatus.

A total of 20 wholetime recruits completed the mammoth 5km mission over the iconic landmark that connects Edinburgh and Fife.

The squad completed it while kitted out in safety kit weighing 25kg – the same as a bag of cement.

Motorists and pedestrians showed their overwhelming support for the future heroes by tooting horns and cheering from the road-side.

The gruelling stomp was part of a momentous fundraising effort that has so far raised £2,000 for four charities - The Firefighters Charity, Anthony Nolan, The Family Support Trust and Scottish Burned Children’s Club.

Station Manager Colin Ferguson, who manages the recruits at the SFRS training base in Thornton, Fife, said: “Crossing the Forth Road Bridge in full firefighting equipment is no mean feat.

“It is a great display of the physical fitness and positive mental attitude expected of our recruits, both individually and working together as a team.

“All our trainees displayed great enthusiasm before and during the event, just as they have done throughout their training since they started in January.

“I would finally like to thank the members of the public who generously donated to this effort which will assist a number of our charity partners, enabling them to continue to assist communities.”

The trainees braved wind and rain as they set off from South Queensferry at 9.30am on Thursday morning.

They trekked the 2.5km route to the Fife side of the crossing before turning back for the return leg.

It also taught recruits how to steady their breathing during periods of physical exertion which is crucial when responding to incidents while wearing the BA kit.

Rhonda Jones, 37, was one of the recruits who took part in the cross-county challenge.

She said: “It was great to be able to take part in such a great charity effort.

“We have all used breathing apparatus at the training camp but it takes it to a new level wearing it during the walk.

"You become more conscious of the weight but it's a great tactic in teaching you how to stay calm and focus your mind and your breathing."

More than 100 wholetime firefighter recruits joined the Scottish Fire and Rescue Service in January this year – the largest ever intake.

Over the last three months they have been put through their paces at three training grounds – Thornton in Fife, Portlethen in Aberdeenshire and Cambuslang near Glasgow.

They are now less than a month from becoming full-time firefighters where they will be able to respond to fires, traffic collisions, floods and chemical spills.

SFRS staff have so far helped add more than 8,000 people to their list of potential donors through charity drives.

Anyone in good health aged between 16-30 can sign up to the Anthony Nolan register – to find out more visit www.anthonynolan.org/sfrs

The Scottish Burned Children’s Club provide support for children and their families who deal with the lifelong scars of burn and scald injuries.

Since 2001 the organisation has helped form friendships between fellow survivors and work to raise awareness of common dangers to children such as the risk of hot water scalds and the improper use of fireworks.

Further information on the charity and its work visit www.theburnsclub.org.uk

The Firefighters Charity enhance the quality of life for serving and retired firefighters, fire personnel and their families – further details can be found at www.firefighterscharity.org.uk